The Houses of Misery

This fictional documentary begins and ends with a chorus and a song that has the emotional impact of “The Damned of the Earth” or “The Threepenny Opera”. Borinage left Henri Storck profoundly disturbed by injustice and social poverty. When he was offered a chance to make another such film he undertook an in-depth survey into the working class and slums and shouldered once again his camera as a militant filmmaker.

In a plot of Walloon slums he staged characters and situations as examples: the promiscuity of large families, women who die in childbirth, the fear of the bailiffs, the money lenders and the heartless, grasping landlords, the evictions, the children deprived of childhood, the unemployment, the incest and the sluts, the tuberculosis, the impossibility of learning, the solidarity between neighbours. All shots work on intensity, the filling of the frame, which gives the impression of being unable to breathe, of being trapped, closed in. For example: the tiny room where a whole family sleeps piled up in such a way as to make it impossible to move around without stepping over a body or moving a basin; the children’s cemetery; the portrait of a family under a clothes line on which is hanging a mixed bunch of socks with holes in them; the stealing of the scooter, the six-year old kids transformed into little mums for the last-born child. And in the face of this overflowing misery is the emptiness of the expressions, the absence of emotion. Survival is all. But the message of hope is there, with the destruction of slums (the hovels are demolished as if getting rid of a tyrant) and the construction of garden cities surrounded by trees in bloom and a future of song, leaves one with the impression that man’s dignity has been safeguarded.

Title card : “The aim of this film is to show the wound of the slum in its awful truth. All these scenes were inspired by authentic facts and were filmed in their real environment.”

Above all, the film needed to have the character of an inquiry, of irreproachable and captivating reporting. So we made it into a pure documentary. However, the desire on the one hand to avoid the intervention of a presenter, and on the other, to make the inhabitants of the slums speak about the slums and allow them to live out ordinary episodes of their everyday lives before the spectators, led us to create a series of scenes connected to each other by a loose anecdotal link, but also by a link of logical and precise reporting. The formula of the film allows a genuine and constructed report to unfold on the screen and, with the aid of a series of acted scenes, gives the film a dramatic aspect and form at certain times. I think it is possible and even rewarding to closely mix drama and documentary in this way. I believe that this formula, as yet ill-defined, offers great possibilities for the future.

Storck has brought such deep humanity, such a deep sense of social justice, such deep knowledge of his subject, such a broad palette of artistic and technical qualities, such rich gifts of intelligence, emotion and intuition to the creation of this film, that the spectator cannot but be totally convinced. It will henceforth be impossible for anyone to tolerate, without deep ill-ease, the idea that at the heart of the social system of which they are a part, there exists this scourge of society that we now realise is inhuman, abject and murderous: the slum.

Over half of these three reels paint a violent, devastating picture of the horror of the slums such as I have never seen created in the cinema. Nothing in the American films on similar subjects comes close to the intelligence, the sensitivity and the generosity that the author of this film brought to his task.

We’re dying of hunger, of misery and cold

The sky is dull through the roof full of holes

In this wagon we sleep night and day

With the fleas, the rage and the decay

How can we sleep when the rain soaks us through

Poor brothers from another world are you

Will we ever leave behind

The mud, filth and grind

What of the child who sleeps in such rot

Of the insult, the incest, the lover’s sad lot

What of the illness that ate at our heart

Help us! Help us! Don’t set us apart.

The subject matter has been fictionalised; it was played by seventy actors and extras. It was chosen by the Museum of Modern Art in New York as one of the best documentaries produced in the world, and in Belgium it was awarded the highest distinction, the Grand Prix du Roi.

Press release of the CEP

This review of a distinguished Belgian 30-minute was written by Mr. Strand, the American filmmaker, for the November 1939 issue of Films’

Lately I have been privileged to .”. on” of the most moving documentary films that I have seen in a long time. This film, Les Maisons de la misère, was directed by Henri Storck and photographed by Eli Lotar and John Ferno.

A single seeing of this picture does not permit final judgments nor detailed analyses. The impact of the work, however, is so strong that the following impressions received at one seeing still endure.

Les Maisons de la misère is a film about housing in Belgium.More than two-and-a-half of its three reels is the most devastating picturization of a slum that I have ever seen documented. Nothing in British or American films dealing with similar material approximates the understanding and sensibility which those who made this film brought to the task. For they have dramatized not only the horrors of slum filth, all the inhuman living conditions of a steel town street, but they have also revealed the people living there with a profound sense of their dignity and worth’ We come very close to these people as the texture of their lives is woven from moments which the camera discovers: the hurry call for the midwife and the funeral of the new-born child; the eviction of a family as the neighbors watch from their windows, unable to help. These and other visits into the houses of this one street which take the audience into the intimate lives of these slum-dwellers never allow us to be disinterested spectators.

To this end, photography and sound have been used richly and sensitively. The instrument of commentary is not used in this film.Dialogue,music,and natural sound carry the meaning and build the dramatic texture. Both exteriors and interiors are the real houses of the real street. The people are the people of the street, except in the case of some of those who have lines to speak. They were professional actors, I am told, taken from the companies of local people’s theaters. They are all examples of superb casting, because there is absolutely no separation between the actors and the non-actors’

On first viewing, the conclusion of the film is not clear, but the great body of it is one of the finest dramatizations of human need I have seen. It is to be hoped that this film will reach American audiences by means of English titles. What it says and the richness of its speech is as true for America as it is for Belgium. 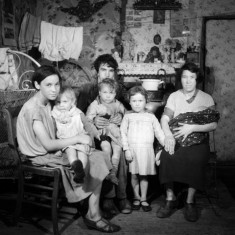