Around the World in the Boat-stop

This is a cinematographic adventure with several layers. In the beginning, it was a film commissioned by the National Committee for Maritime Propaganda about maritime trade with the Congo, the great merchant ships, trade with South America.

To this project was added another request coming from the Belgian ports (Antwerp, Zeebrugge, Ghent) and the shipowner Deppe. It involved following the ships during a crossing of 21 days to film the journey, and included something that was not originally planned, but which is in the film, a terrible storm and a collision with a lighthouse boat during foggy weather.

Based on this, Henri Storck, with the active complicity of Mr. Leysen of the BRT, suggested the outline for a programme about travel followed by a debate. It was a very innovative idea for a television channel still in its infancy, a programme pioneering in-depth reporting and round tables: it lasted sixty minutes with a twenty-minute film and a debate of forty minutes led by the actor-reporter Jan Peré. He played the role of the traveller who recounts his adventures and asks specialists questions that can throw light on his experiences and discoveries – jurists, economists, architects, sailors, ethnologists/folklore experts. In general, in the fifties, only women were qualified to talk about problems of religion, children, nutrition and clothing. On the set there was a globe and the presentation of objects set out in suitcases. The pretext for the whole thing was a man who hitched rides on boats asking the captains to set him down in each port and allow him to see the world. The basis of the discussion was the films. In Argentina a pilgrimage in Lujan was filmed by a single fixed camera at the foot of the steps of the cathedral, a very beautiful exercise à la Eisenstein; the life of the great haciendas, the vast herds, the raising of sheep, the capture of wild horses (The Misfits without Marilyn), the daily life of the gauchos (superb shots of barbecues and the chewing of steaks); the folklore, with the group of dancer-musicians les Abalos and a piece of bravery and virtuosity, the dance of the boots called Malambo; the history of the country, etc. In Brazil, the cultivation of cotton and coffee, a very pretty didactic film. Also filmed were an architectural promenade in Buenos Aires, the islands off the coast of Brazil, the life of the crew on board a steamboat the Elisabeth-ville, a magnificent and impressive storm at sea (five minutes of pure cinematographic joy). In the Congo, the port of Matadi, the markets, the transport of wood, the traditional courts, the segregation camps of the Blacks, etc. Among these topics, which were developed to varying degrees, some would have been worthy of being edited into short films; in particular the filming of a colourful trial featuring a poor customs officer sweating heavily in his uniform, taken to task by two sturdy harridans, his wife and his mistress who talk a blue streak and have bodies that speak volumes. Or the epic of the Ostend fishermen who come to fish in the Tropics as they would in the North Sea, a surrealistic shift of reality wherein one hears these sturdy Flemish sailors sing bawdy songs surrounded by black ship’s boys and organise the sale of fish by auction just like the Minque in La reine des plages.

Although the programme, with its presentation and debate no longer exist, Henri Storck still has the content of these reports in 16mm.

With the collaboration of the actor Jan Peré

Film destroyed: All details and information in this note, since they can no longer be supported by the film itself, were told to us by Henri Storck who rummaged through his files and memories on July 9, 1994. 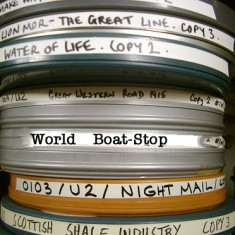