Storck was born in Ostend on 7 september 1907. He died on . His father owned a shoe shop and an aunt of him ran an art gallery. He became a close friend of painters like Ensor, Permeke, Spilliaert, Tytgat and Labisse. Art has always played a great role in his life and sorne of his finest documentaries are art films: Rubens, Teirlinck, The open window, Paul Delvaux, Permeke …

But the films Storck is best remained of, are his social documentaries. The most famous is Misery in the Borinage, he made together with Joris Ivens. Poverty and the fate of the homeless are also in his other great social documentary from the thirties: The house of Misery. During W.W.II he filmed the sociological documentary Farmers Symphonie and after the war, At the crossread of life (onjuve­ nile delinquency).

Storck had also an open eye for the sunny side of life, for An idyll at the beach, Sunny life at the beach or the Feasts of Belgium He made or produced documentaries on foreign coun­ tries, as Easter island and Lords of the forest, a cinemascope-documentary on the life in the now bebattled East-Congo.

Storck has made almost 100 films in aIl, but in his own country, he was often restricted by the negligence of the elite for the filmmedium. The “Belgian Documentary School” which he formed with Charles De­ keukeleire and André Cauvin, never was a schoollike the British one. “!t has”, to quote Sinclair Road, “continued ta revolve around a handful of individuals of whom Henri Storck rentains the most outstanding. ”

Out standing Storck was also when it came to organise the documentary sector. At the international level he had contacts with the topproducers and directors of his time. In 1964 he formed together with Gian Vittorio Baldi and John Grierson the “International Association of Documentary Filmmakers”. Later on he founded the succesfuIly CBA and in 1988 he became honorary president of Hot Doc. Storck proved that you do not have to harm your own career by working together with other people to promote the documentary sector. On the contrary.

It seems to me that the best tribute we can pay to Storck, is by organising, thanks also to the enlargement of the sector and the modem communication techniques, the Belgian Documentary as it has never done before, so that the Belgian public keeps on loving documentaries, that new generations of film-, TV- and multimedia-makers keep on feeling the excitement of documentary making, that our films can be produced in the best possible circumstances and that they will be spread by a much more efficient distribution system than today. That’s the challenge. 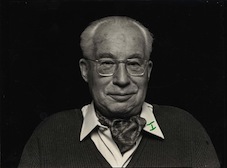