At the end of the nineteen twenties, two future film-makers discover their medium. Charles Dekeukeleire and Henri Storck will become famous documentary film-makers, but their debuts consist of experiments and the search of a ‘pure cinema’. With the occasional surrealists Henri d’Ursel and Ernst Moerman, they make up the first avant-garde generation in Belgian cinema.

Seven composers wrote the music for these unique films: Joachim Brackx, Eric Sleichim, Jan Van Outryve, Annelies Van Parys (in residence at Transparant) and Mireille Capelle, Geert Callaert and Thomas Smetryns (in residence at HERMESensemble). The works for ensemble are performed by the HERMES ensemble conducted by Koen Kessels. In the essay that accompanies the two DVDs, Xavier Canonne reconstructs the thrilling years 1927-1937.

Composition by Joachim Brackx
Film organized in visual chapters: the port, the anchors, the wind, the meerschaum, the dunes, the North Sea… a series of images which are completely freed of anecdote and illustration. Water, sand and waves become an integral part of the filmic vocabulary.

Composition by Joachim Brackx
“Félix and I decided to move into film-making. I had shot Images d’Ostende (Scenes of Ostend) in 1929, but the ideas for the next film, Pour vos beaux yeux (For Your Beautiful Eyes), came from Félix.” In eight minutes and 75 shots, the film tells the story of a young man who finds a glass eye in a park, becomes obsessed with the object and attempts to get rid of it by sending it through the post. With Henry Van Vyve in the main role (Labisse and his sister Ninette made an appearance only in the first third of the script), the film was a clear surrealist statement, one year after Un chien andalou and its razorcut eye.

Composition by Annelies Van Parys
For Histoire du soldat inconnu (Story of the Unknown Soldier) Storck watched newsreels for the whole of 1928, the year when 60 nations signed a pact outlawing war, and juxtaposed this heart-warming utopia with the signs of a forthcoming conflict (this was in 1932) – burgeoning nationalism, police brutality, excessive colonialism, bellicose politics. Ferocious editing sarcastically juxtaposes these good intentions with the political farce of speeches and parades, all to the tune of factory chimneys collapsing in slow motion and the exhumed body of an “unknown soldier”.

Just like he did for Histoire du soldat inconnu (Story of the Unknown Soldier), Storck uses newsreels from 1928, which he distorts, although in a more humanistic and slapstick way. He combines images of the crowd, police repression, explosions, riots and fire with images of gymnasts, music halls, models and sea lions, which make it all the more disturbing.

Composition by Eric Sleichim
When Charles Dekeukeleire makes Combat de boxe (Boxing Match), he is 22 years old and obsessed with cinema. He immediately aligns himself with the defenders of pure cinema, Germaine Dulac, Jean Epstein, Marcel L’Herbier, Louis Delluc. He also admires Vertov and his conception of the Kino-Glaz, the cameraeye. A poem by Paul Werrie served as starting point for this film which is based on a high-speed montage, close-ups, superimpositions, the successive use of the negative and positive image and the principle of rhythm. The violence of the fight, the presence of the audience, the tension between the crowd and the ring are swept up in a dazzling choreographic montage.

Composition by Annelies Van Parys
Charles Dekeukeleire, a questioning Catholic, is spurred into making this documentary by a pilgrimage undertaken by the Catholic Young Workers’ Movement. The director’s approach is one of critical reflection – emotional and fervent, often acerbic – on the site of the most crystal-clear credulities and beliefs of all. Processions of pilgrims brush past artful bigots and candle sellers; water pours down in all its forms like the strings of rosary beads sold at the display stands; the sick, patiently awaiting the miracle, are cut against images of the gifts to the Holy Virgin (hieratic crutches suspended in their hundreds inside the Sacred Grotto, letters imprisoned by the thousand in metal grilles open to our view and the incredible sight of a floor strewn with leather corsets and wooden legs).

Composition by Thomas Smetryns
An introductory title informs the spectator that the film will be composed of four series of images, “the motorbike, the woman, the mountain and abstract blocks”, elements which serve as the starting point for Dekeukeleire to construct his film according to very precise parameters. The rhythm is given by a mathematical fragmentation of the film’s running time, divided up into temporal segments where the four repertories of images succeed each other in every possible combination with no respect for either melodic line or dramatic tension.

Composition by Geert Callaert
A woman, concerned about the continual absences of her husband, commissions a detective to follow him and report back to her. At first glance this appears to be a classic fictional device, all the more so since Charles Dekeukeleire segments his film with titles informing us of the latest developments of the story. Yet this framework serves only to set up a narrative pretext for disrupting narrative itself in favour of pure cinema. For the detective uses photographic equipment as an instrument of investigation: thus, the camera becomes the principal character and its subjectivity the principal subject of the film. Titles designed by painter Victor Servranckx.

Composition by Mireille Capelle
The count Henri d’Ursel shot La perle (The Pearl) under the pseudonym of Henri d’Arche “in the flush of inexperience”, as he put it. D’Ursel made only one film, based on a screenplay by the poet Georges Hugnet. In a Paris straight out of the serials of Louis Feuillade, the hero goes in search of a pearl which constantly disappears in a string of bizarre encounters – sneak thieves in a hotel wearing body stockings à la Musidora, a beautiful fiancée on a bicycle and a somnambulist walking the rooftops in a night-shirt, amorous fantasies in the undergrowth. Hugnet himself played this waking dreamer, haunted by an unending eroticism reflected in the images.

Composition by Geert Callaert
Ernst Moerman was an ardent fan of Souvestre and Allain’s character Fantômas, whom he dubbed “the demoralizing gentleman”, he made him the emblematic hero of his medium-length silent film, Monsieur Fantômas. Shot on a shoestring budget on a beach and in an old cloister, the style of this scathing surrealist satire is immediately recognizable as that of the Feuillade serials. In top hat and tails, the Master of Crime (played by the future father of French singer Johnny Hallyday) tours the world in pursuit of the beautiful Elvire, punctuating his travels with mischief and acts to offend proper decency. The film encompasses amour fou, the meanders of dreams, fanatical anti-clericalism and a plea for subversion and adventure in “a world where nothing is impossible, where the miracle is the shortest route from our uncertainty to mystery” (E. Moerman)

DVDs can be bought at the Fonds Henri Storck 19€ 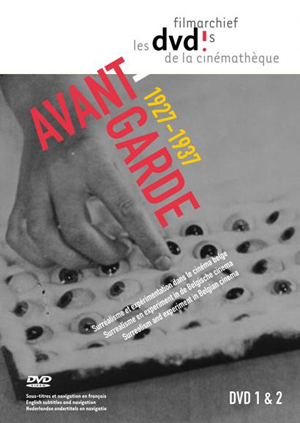