This film is the first trial, the “rough copy”, for the series Fêtes de Belgique. Filmed as they happened, this is a live report of two carnivals: those of Malmedy and Eupen.

Malmedy is a happy little town in the heart of the Fagnes. The popular celebrations are all that remains of its past as an abbey town. It is difficult to remain indifferent to these flashy, fanciful, bounding characters, the Haguètes, the long arms and the savadges, symbolic representatives of the joyful mockery and alert irony of the Malmedy spirit, who look for victims in the jubilant crowd.

The carnival in Eupen starts with burlesque exhibitions and tributes paid to His Highness Prince Carnival, uncontested sovereign of the people of Eupen during the two days and nights of his reign. A healthy and strong joy invades the city, stops it from sleeping but not from drinking, laughing, eating and dancing until it drops during the all-too-short reign of the Prince.

These title cards, presenting the carnivals are followed by what makes up a carnival; the masks and the crowd, the floats and the parades, the brass bands and the costumed characters filmed randomly according to what caught the eye throughout the unfolding of the celebrations and what took the fancy of the cameramen. They had to capture, in the hustle and bustle of the disorder, what it is that defines a particular carnival, with its outlandish characters and their sometimes feather ruffling and insistent roles. Music, ploys, the crush of the crowds, everything is there in a series of haphazard shots, edited in festive disorder.

Henri Storck and his team learned the art of filming festivities here. 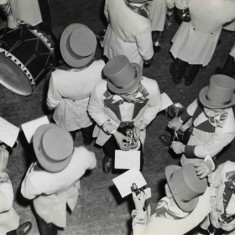