This is an account of a Franco-Belgian scientific mission on board the training ship Mercator.

The narrative has a very classical structure. Against the backdrop of a map of the world a very simple commentary describes the island and gives a brief account of its geographical and historical situation. Then, from the arrival to the departure of the archaeological explorers, the film is composed of a series of sequential blocks organised for maximum dramatic effect. The first shows the famous statues and their mystery, the graffiti, inscriptions on the rocks, the discovery of caves. The second is devoted to the island as it is now: the poverty of the inhabitants, their fervent Catholicism, the presence of leprosy and the lepers’ house, the portrait of a sculptor who carries on the tradition of the statues and his mother, mineralised by age, more wrinkled than all the Hercynian folds in the rocks, a celebration and its traditional dances. Finally, the third part shows how, after receiving one of the colossal heads as a gift from the Chilean government, the crew carts it to the seashore then hoists it on board the ship. This part has the epic pace of collective effort, which puts one in mind of Eisenstein’s style. Between the famous past and the miserable present, the film draws the portrait of an island where sensationalism gives way to humanity.

The film not only shows the enigmatic stone statues, but also the miserable life lived by the evangelised Easter Islanders. It caused a few scandals, but does not throw doubt on the authenticity of the documents.

Easter Island makes a rare spectacle of any image. And for our joy, this one is marine: exhilarating sailboats, water always present behind the crests of the hills scattered with sculptures and lunar dunes. Storck is in his element here, he knows the measure of the waves, composes the sea, and with a snick of his scissors, he stops the ships.

Magic… It is the only fit way to describe the gigantic figures, half-human and half-lunar that long ago decorated the valleys and hills of this little dot on the map, lost in the vastness of the Pacific Ocean. Easter Island! Few names provoke such dream-like associations, even in the rigorous world of science.

The first documentary about the mysterious island in the Pacific. Several excellent passages: the celebration of January 1st with Polynesian dances in European sailor clothes, the awful sight of the lepers playing the ocarina, the huge heads of the extraordinary statues standing facing the sea. More convincing than any written demonstration, the cinematographic view of the statues being dragged by fifty-odd people shows how the natives of times gone by could have sculpted, transported and erected the giant statues, doing away with the idea that some other people, disappeared in some distant catastrophe, must have intervened.

L’île de Pâques and Les carillons at the biennial of Venice. The choice of these two films, the merits of which all the critics have highlighted and which are currently pursuing a brilliant career on our screens, is particularly pleasing. 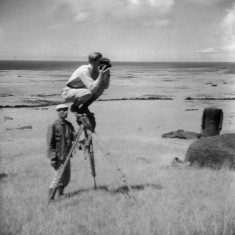