For Your Beautiful Eyes

Ostend 1929. Henri Storck and Labisse were great friends. The former created the cinema club. The latter opened an art gallery with his sister Ninette, a sculptress. Labisse became assistant secretary to the cinema club.

But despite their great friendship, all was not plain sailing between them. Luckily, there were differences of opinion. Discussion was the order of the day. They exchanged letters and published them to make their disputes public. But ideology and polemic were not enough for them. “We must make films,” said Labisse to Henri. They had read Breton, and Storck sent Le Poisson Soluble to Ensor. To his disappointment, the master replied: “I don’t understand a word”. It was a hard blow, but youth and enthusiasm gained the upper hand. They decided that even if their powerful guardians did not follow them they would follow their own path, their own desires… “Félix and I decided to make films. I had filmed Images d’Ostende in 1929, but for the next film, Pour vos beaux yeux, he invented the script. It was the strange story of a young man who bought a glass eye and sent it through the post.” (See below the description of the sequence of the 75 shots. It is quite exhilarating and was filmed in the same year as L’ Age d’or. Its loss is dismaying). As with all Storck’s early works, it is surrealist in spirit. Erotism is combined with social criticism. This film was projected at the studio of the Palais des beaux-arts, at the Club de l’écran in Brussels.

Intimate aspects of the city in winter : The port, Anchors, The wind, The spray, The dunes, The sea

A cruel anecdote on the theme of optical obsession: a glass eye that a young man can’t get rid of. 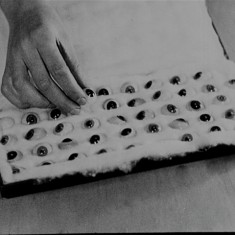