An opera film without commentary dedicated to celebrating the manufacture of steel and the smelting furnaces. It makes the steelworks seem both grandiose and Dantesque, transforming them into an ode to work and the mastery of men. Storck films this industrial hell like some choreography for Titans.

Each shot is full of tension: the slightest negligence could cause a catastrophe. The construction plays on the opposition of colours and work between the shop floor, reddish, huge, terrifying, and the control rooms, cold, bluish laboratories, reserved for the engineers. The work is presented as a ceremonial with its gestures and the implacable progress towards its accomplishment: the workers put on their fire warrior breastplates, the molten steel boils in the infernal furnaces; the moulding, taming, laminating machines go into operation. The whole process of production is dramatised, the description of a process of production becomes that of a struggle and victory.

Commissioned by the Steelworks and Smelting Organisation of Belgium

In minute detail, the script of the film goes over the operations carried out by the teams of workers, foremen and metallurgical engineers in mastering and guiding the activity of these complex and powerful machines that are the equipment of steel working… The film ends by showing the main products and uses of steel… Another leitmotiv of the film is the fascinating sight of the teams, who show great solidarity in the accomplishment of this dangerous task carried out according to strict instructions. Their constant vigilance and prompt reactions, supported by sharp eyes and quick judgement, are essential in order to control the fabulous machinery.

A film made on request of the Belgian steelworkers to be shown to the huge crowds of the Exhibition in Brussels. It was necessary to get inside the factories and highlight the visual elements of a job that, at first glance, appears incomprehensible for the layman… The director had to take on a spectacular constraint: Cinemascope.

Hardly any European professionals at the time had even used the format. What’s more, the cameraman, André Bac, agreed to take part only if there were no camera movements… yet another constraint. 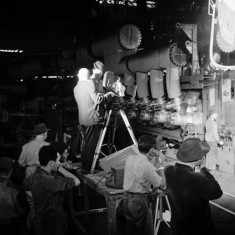