The portrait of a writer. His stature and importance are as evident as they are unrecognised. Herman Teirlinck, poet, novelist, dramatic author who was instantly famous and who left a first-class body of literary work also did extremely innovative work in the experimental studio of the theatre in Antwerp. He had a career at the Palace, linked to the kings Albert I and Léopold III. Henri Storck endeavours to evoke all these facets of his personality.

The film is constructed in a series of sequential blocks. Firstly there is the man and his environment, introduced through his daily walk along the banks of the Senne, carried by his love of the Brabant region, trees and meditation. Next comes the presentation of his books and career. Then there is the evocation of his life, his childhood, his relationship with the city and the countryside, of this strabismus that forced him to see life from two sides. After the private man there was his public life and his remarkable work directing actors in a school in Antwerp (the sequence of him teaching that deserves to be seen by a wide audience for it is historically avant-garde and poses all the problems of the actor in very modern terms). Finally, his speech in the Libre Parole as he received an award for Dutch literature and his text summing up his life, a veritable legacy: If I help someone, it is to rid myself of the awful spectacle of his impotence. I can only shed tears for acts of love, courage or humility.

It must be remembered that in the fifties, before the arrival of magnetic film, when we filmed with optical film, there was a desynchronisation of the sound. The camera filmed at 24 images/second and the sound at 25. That very quickly created a disastrous comic effect that made viewers laugh. Since Herman Teirlinck is a writer who wanted to be master of his speech, I sat him opposite an interlocutrice whose image in the foreground made it possible to mask this technical fault…

I also wanted, since his text was beautifully written and remarkable, to make the image not just an illustration, but a journey through the past, so I accompanied this magnificent monologue with images that followed his thoughts. We tried to find places in Brussels, and in Brabant, in the Flemish countryside, that had not changed since when his father lived there in 1885, and since his own childhood. What one sees on the screen restores the permanence of what is said… 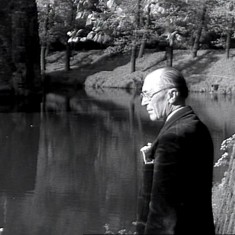