A father and son, both deaf, are out walking. This walk is a pretext to approach all the problems of the circulation of sounds, of silence, of vibrations and communication…

Situations are staged: making oneself understood, learning, reciting poems, asking for a glass of milk. The day ends in a quasi-surrealistic finale: talking about an afternoon spent with the deaf at a dinner for the deaf. This minimalist and pastoral situation allows the soundtrack to approach the perception of silence, the mechanical voice of the deaf, to create gags: the music stops when the deaf people arrive etc., in short there is a certain inventiveness. The image carries the fascination for gestures and a pastoral serenity.

This short film is simple, modest and moving, enclosed like a report.

For this film Jacques Dormont, who is himself deaf and mute and an artist of great talent, composed a poem. We know of no other examples, in Belgium, of poetry written especially for deaf-mutes and signed by them.

Press document for the release of the film.

The problem here was to reach a wider audience through the intermediary of television. It was necessary to clearly show the little-known sign language of deaf-mutes, to be eloquent and moving with discretion. The aim was not to provide metaphysical variations on the theme of non-communication. On the contrary, it was to create a human documentary highlighting the possibility of communication… We think that Storck fulfilled this aim wonderfully. He situated his characters in a double emotional context, the first being that of direct kinship, the second consisting in setting them in natural surroundings. Their touching dialogue draws its substance from relationships of pure sensitivity, among the trees and the light, and the meeting of uncomplicated people and situations. Thus, a sort of poetry is born out of the mimed language… and Storck seems to have discovered the world at the same time as the young deaf boy. 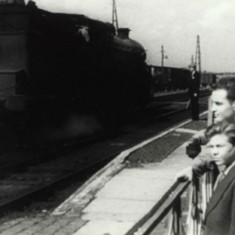