The film is structured on various levels. It uses the three levels of the image: cinema, the reproduction of paintings, and freeze frames on photographs. It also uses several structures of narration: the documentary and fiction – the search for truth (the inquiry) and the discovery of another reality (the fantasies) – and two time frames, the past and the present.

Originally a project for a classic Henri Storck documentary, in the end the film favoured the more fictional approach. The director Patrick Conrad suggested a story: introducing the artist’s life and works through a detective theme and adventure of seduction. A young photographer discovers the work of a painter about whom she knows nothing. The strength and mystery of five paintings have made a particularly strong impression on her. Who was this man who was capable of painting canvases as enigmatic as L’étranger, le petit cheval or portraits with rubbed-out faces? A terrace, a charming but secretive old man, and a pair of red gloves serve to guide her in solving these mysteries. Intertwined throughout is the life of Permeke, his painting, the personality of the young woman, and the discoveries she made, which bring her to understand the tragedy of a man surrounded by death when all he loves is life. Although fiction gains the upper hand, Permeke is there, shown and recounted by the photographs, the films, the previously unknown tales and, of course, his works. This film is somewhere between a film on art and fictionalised biography, an attempt to dramatise that has the merit of innovating and inventing in the difficult genre of documented fiction.

A film by Henri Storck and Patrick Conrad

Furthermore, Storck and Conrad have taken care to place the activities of the artist in his time: not only in the artistic life of his times, with the presence of artists such as Van Gogh and James Ensor, and a musician like Eugène Isaïe, but also in historical life, with the dark years of the First World War. Finally, the authors have sketched a parallel between the style of the paintings and the character of the typically Belgian sites that partly inspired them… A somewhat complex work, but which avoids saturation thanks to a dynamic and elliptical form that shows a highly developed sense of suggestion… a modern form that plays on all the elements of cinematographic language and excels in making them intermingle. 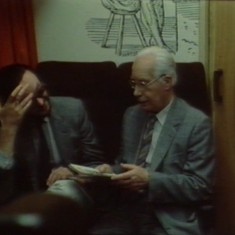