Story of the Unknown Soldier

A visionary film which, while politicians were making pacifist speeches, perceived that all these peace conferences were inescapably preparing another war, fresh and joyous, like the last one.

This ferocious collection of images of civilians and soldiers endlessly parading denounces the alliance of the Army and the Church, the blessers of wreaths, the windbag orators, the inaugurations of monuments to the dead. A huge gathering of puppeteers pulling the strings of the world and the canon shots, are turned into metaphors by the images of buildings collapsing and excavation sites where mass graves are being dug up. The synoptic and syncopated violence of the images is, in the version with sound, reinforced by ironic funeral marches, military music or light-hearted melodies.

Title card :”This film is a montage of news items from 1928, the year of the Briand-Kellogg pact that declared war was illegal.”

Banned by the French censor in 1932

A strongly pacifist film that reveals the hypocrisy of politicians.

The structure of this film is born of a conflict between an utopian idea, the outlawing of war and the senseless spending on military defence that would be shown to be derisory in 1940. Citizens and war veterans were betrayed. The war to end all wars as they said back then was just a myth. The symbol of the anonymous citizen was indeed the poor Unknown Soldier from the lower classes who had spilled his blood defending his country. Now was the time of the arms dealers, thanks to the policy of the great nations. But the poor Unknown Soldier, cut down like an animal, continued to be venerated, buried with great pomp and ceremony… This film is without commentary. It is a gallery of images of politicians and heads of state. We catch glimpses of Aristide Briand, president Doumergue, Paul Brudent Painlevé, the chief of police Chiappe, Maginot, Mussolini, Prince Umberto, the regent of Hungary, Horthy, Poincaré, the presidents Lebrun and Tardieu, the mayor of Lyon Herriot, the lord-mayor of London, Alphonse XIII King of Spain, Ramsay MacDonald, the Prince of Wales, Marshall Pétain, president Hoover, Streseman, the president of Mexico, Foch, and Kellog, the American senator who signed a pact that earned him the Nobel Peace Prize.

Histoire du Soldat inconnu was, at the time, banned by the French censor. It is a satirical tract against the Army, the Church, Capital. Here Storck denounces the threat of rearmament, the rise of various dictatorships, the futility of peace treaties and foresees the sinister threat of Hitler. Ultimately, this was genuine cinematographic news. There were no actors save the obscene apparitions of power, no staging save that of the military parades and sacred ornaments. 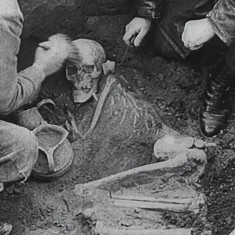