The Boss is Dead

Le patron est mort. On December 30, 1938, the day of Emile Vandervelde’s funeral, Belgium is in mourning and pays tribute to this man who was a great militant, leader of the Belgian Labour Party, a man of state, a key figure of international socialism.
This film is a very moving document steeped in a deep sense of history.

This leader of the working class was given the funeral of a king.The mourning ceremony is epic: a big crowd gathered in the House of the People, a catafalque watched over by miners in front of which thousands of mourners parade, tons of wreaths, drapes, officials, candles, all the powerful and less powerful people of a country united in common respect, a sea of banners at half-mast, streetlamps draped with black. Brussels was in the grips of winter rain, night fell swiftly and was lit by the torches of the militants. That day, the Labour party, in the sincerity of its suffering, organised a ceremony worthy of Hollywood or Eisenstein. The film is as moving as the event deserved to be. It is not a populist peplum but the rigorous accompaniment of the expression of a great popular force. It opens with a series of photographs of Emile Vandervelde, from his adolescence to his death, a short history of the evolution of a body and the establishment of a man of calibre. We hear the voices of Vandervelde, Léon Blum, Louis de Brouckère, Camille Huysmans…

Assistant Directors : Fernand Piette with the collaboration of Georges and Albert Housiaux

Choirs : Lasalle-kring choir of Antwerp, Socialist Harmony of the House of the People in Brussels, choir of Pâturages

To this music, to these hymns, to these speeches, of sober and gripping grandeur, the film adds its poignant testimony. Henri Storck’s work is a poignant assemblage of photographs, fragments of newsreels showing Emile Vandervelde’s distinctive silhouette standing out in the foreground. The deceased’s voice – with its deep round tones – brings to this film the most moving commentary one could imagine… The trembling crowd listened to this voice from beyond the grave and contemplated, almost avidly, the images of a past full of fervent and tenacious struggle. The evocation of Emile Vandervelde’s funeral on this dark December day that attracted crowds of workers to Brussels from all over the country, under the shadow of flags draped in mourning crepe, gives the finishing touch of grandeur to this work.

Tens and tens of thousands of people stand silently lining the streets where the procession passes, each saluting the remains according to their own convictions. The most memorable is the ceremony itself, which reveals the existence of a socialist ritual that is, all in all, a little known chapter of Western European ethnology.

The faithful camera records it all in a jumble: the mourning, the sadness, the tears, and when Louis de Brouckère speaks, saluting for the last time his old companion of many struggles, each image of his speech corresponds with an image of the film, in subtle evocation.

I am writing to express my strong and lucid emotion after seeing once more Le patron est mort last night. For me, this is an example of pure and primitive truth in cinema. And the great Storck made it! Using only simple, non-fabricated means of elementary images (that is to say made with the elements) and sounds just as elementary (voices, speeches, brass bands, a few rare recorded sounds). And the emotion – through this simple covering of real fragments – has never been more effective or accurate. This is the very opposite, or rather the other side, of the languages of fiction. 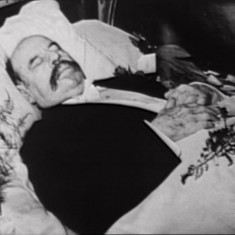