The color of fire

This film was presented at the Universal Exhibition in Brussels (1958) in four distinct parts projected simultaneously onto four screens. This film too, has lost its colour, which is particularly unfortunate for its very subject was the dramaturgy of fire.

This film had no commentary. Henri Storck imagined it as an opera and edited it like a magnificent show, a modern vision of the Vulcan forges. The filmmaker was impressed by the smelting ovens, the great flow of molten steel, the strength of the rolling mills, the work of the workers transformed into asbestos robots. The film has an element of lyrical celebration, a powerful force. It must be said that the format of this film, one of the first in Europe to be filmed in Cinemascope, disconcerted the cameraman who was ill at ease with the movements of the machine and who therefore mainly filmed fixed shots. The factory looked like the lair of the last Titans, an industrial Metropolis, a testimony that has become history since the depression hit the European steel industry.

Film commissioned by the Steelworks and Smelting Organisation of Belgium 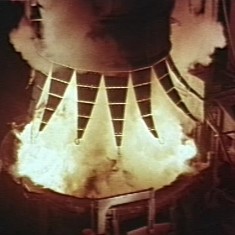