The fifes and drums of Entre-Sambre-et-Meuse

From before Whit Sunday up until the end of September almost forty towns or villages from entre-Sambre-et-Meuse are animated by picturesque military parades, sometimes with over a thousand participants.
The role of these companies of marchers is to escort the processions and pay their respects by firing their muskets. They bring to mind the pledges of the archers, crossbowmen and arquebusiers of times gone by. For the past few years, some marchers have opted to wear the uniforms of the First and Second Empire. They thus revive memories of the Napoleonic epic that deeply marked this region, especially on the eve of Waterloo.

The first shots give a general idea of the landscape and the place. The false soldiers march through the countryside. Serious, determined and solemn: they are not there just for the fun of it, even if they do have fake beards, operetta képis and fanciful regiments. They march in step and in rhythm. Canteen women serve them a drop of pékèt. Aside from the pleasure of imagining oneself to be a soldier of the old guard of Napoleon, or a captain of Empire, they are there to accompany the processions.

This is the benevolent alliance of the sabre and the aspergillum. The priests watch the soldiers parade by and vice versa. The troops mime battles, fire their guns with much noise and smoke and refresh themselves with beer. The banquets resemble those of the fraternities, with speeches and student-like initiation ceremonies.

The participants play the game and literally relive history. The crowd also takes it all very seriously. A Storckian shot: a blind man and his dog ‘watch’ the parade pass by. 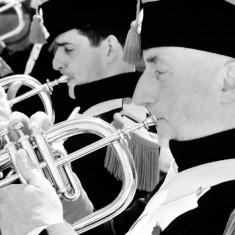