The title says it all: breathing life into museums is what all the educational departments of these institutions are about.

A brief sequence of introduction situates the historical problem, that of the creation of the museums: when did the private, royal or princely collections become public, open to all? Once this step was taken, how could they be made interesting?
The teachers, schools and guided visits are at the forefront of this promotion that has the whole range of possibilities: conferences, workshops, contact with the works or objects, media coverage, shows, opening up to the working class. The omnipresent commentary leads the way; the images, situations and protagonists are the minimal illustration of a discourse. Which goes to show that the form can contradict the content and that a desire for openness can lead to closing down.

Argument : Henri Storck, inspired by the works of the International Council of Museums and especially the ideas of Georges-Henri Rivière

With the collaboration of the Quatuor vocal of Brussels and the Orchestra of the concerts de midi.

Film commissioned by the Ministry of Education and Culture

The film could not go into all the resources offered by the Belgian Museums in the educational field. It is more of a sampling carried out according to the circumstances and conditions offered. In fact, this film is no more than an initial sketch for a more accomplished work. It needs to be reworked and completed according to the reactions and remarks of its first viewers. It aims above all to serve not as a model or prototype, but as a working instrument to provoke discussions and exchanges of ideas on the part of the specialists on these questions, interested teachers, cultural animators…

Henri Storck, Presentation of the film, 1965 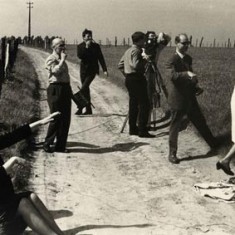