A few everyday images on board a three-master in the Southern Seas during a cruise of the training ship “The Mercator”. We show how the pupils of the national sailing school in Antwerp end their training to become sailors. We could not give a more concise and accurate résumé than this opening explanatory title card for the film.

The film is cut up into sequences each of which has a title: the sounding line, the fabrication of ropes, maintenance, passing the line, the sextant, the fabrication of sails, etc. The longest sequences, dealing with collective work, are carried by a song that takes up the great themes of sailors’ laments, seafaring folklore of melancholy sounds that are to be found in Maurice Jaubert’s music.

Henri Storck and John Fernhout, ever faithful to their fascination for man’s gestures and work, offer a description of sailing, the rigour and precision of all the rituals necessary to the proper functioning of a ship… But while the gestures of work have as much impact as in the Russian films, they are more anthropological than ideological. The tightly filmed shots give an abstract frame and geometrical aesthetic to all the actions. The shapes of the sails, the lines of the ropes, the rows of sailors, the creation of perspective or bird’s eye view, cut up the space with the rigour of a pictorial composition.

Those who sit at home in their slippers, dreaming of adventures on the vast sea will perhaps be a little disappointed by this film. It is too bare, too stripped. It lacks romantic flourishes. One is too aware that the lads heaving on the ropes or washing the deck, barefoot in the icy water, are real sailors, who care little about playing to the camera.

Given the impossibility of providing sufficient explanation for each image of the film, and believing that they could only be of interest to sailors anyway, the producers felt it was better to let the images speak for themselves by accompanying them with sailors’ songs, created specially for the film, and inspired by genuine sea shanties.

The changing of a sail at full speed is a rare sight: inert, heavy, the new sail is hoisted to the main yard of the topgallant where the ship’s lads busy themselves with the ropes like spiders in a web. On command, the sail frees itself, shivers, takes the wind and fills out like a wing… This film was approved by the Navy Department. 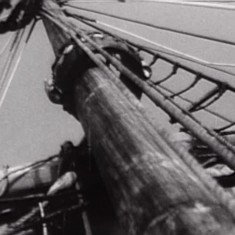