Three Lives and a Rope

The idea is a simple one: three alpinists climb Mont Blanc. This situation brings one face to face with the dangers of the mountain: avalanches, crevasses, fog, the climbing of the rocks, roping up, etc. All of this is magnified, transcended by a remarkable and strong use of the language of cinema.

For example, the Hitchcockian beginning: a shot of a snow-covered plaque giving the name of the place, then a panoramic shot looking down on an impressive horizon, a man opens the window of a chalet… a close-up shot of the climbers’ feet as they walk. This effective use of editing was used to make this film into an ode to Man and his relationship to the world and space, to the beauty of effort. There is no voluntarist message but a poetic and exciting correspondence of a gesture to its aim, of a body to the mastery of the elements. This lyricism is constantly supported by the polyphonic music of Maurice Jaubert that gives rhythm to the climb and conquest of the summit. The effectiveness and aesthetic of the shots and editing put one in mind of both Vertov and Riefenstahl, although without the ideology of either predecessor. There is no pathos, no melodrama, no beautiful shot for the sheer sake of it, there is no message. The aesthetic is never made to correspond with ethics, that’s to say, for a documentary, it is linked to the truth of the subject and the desire to inform without deforming. The incidents are simple and true, but two old mountain dwellers’ tales – a drama (the little snow cat) and a comical episode (the amateur mountaineer) – are there to remind us that Henri Storck was the great fictionalist of nature.

Title card : IFA presents “a film about mountain climbing filmed entirely at high altitude in the Mont Blanc range with the collaboration of professional guides”.

But that which is the most characteristic of Storck’s contribution to this type of film (mountain films) is the otherwise neglected importance of gestures, behaviour and actions. One swings between a quasi-anthropological sensitivity and a deep interest in technical, sporting acts. He follows operations in their smallest detail and with great capacity for analysis, in order to highlight the complexity of this articulate and fascinating knowledge that leads to spectacular exploits, but which is based on tangible manual technical knowledge.

When one sees this film, one is struck by the rigorous simplicity of the vision, by the refusal to dramatise and present mountaineers as supermen. Storck is the complete opposite of a romantic sensationalist like Arnold Franck… He learned the lesson taught by Flaherty, the principle of which is to focus on the everyday behaviours of the characters, placed back in their context, and to translate the beauty of the landscapes, as they are, without aesthetic flourishes.

Storck was oblivious all the way through the film. The man was completely obsessed by his profession. He saw only film, spoke only film and transposed everything onto a spectacular level. He wanted to film an avalanche and was dissatisfied with the meagre flow we managed to create. He exasperated us one day to such a degree that we vowed to produce a big flow. Storck and the rest of the team went and set up their equipment on a projecting shelf. Then he shouted to us: And I want an avalanche that stops there, d’you hear me, there, 50 centimetres from the camera. 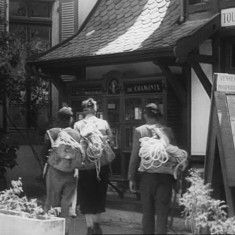