The idea is simple. The North Sea. It’s raining. Two young people take shelter in a hut and smile at each other. When the sun comes out again, the sand, the water, and the sea contribute to their lover’s games. There are several magic shots: hands playing with the sand, hair-like kelp, a seashell ear, clothes thrown on the sand and snatched by the sea, a landing stage transformed into a sea cave, a kiss while bike riding, bodies turning cartwheels. The sea is more than a landscape; it is a metaphor for pleasure itself and serves as a medium for sensuality. The framing plays on the contrast of close-ups (fragment of body compared with a marine element) and wide-angle shots (the body and the landscape in an analogical fusion). Transgressive counterpoints strengthen and intensify the encounter: the barracks and the duenna, i.e. the soldiers and the family, are designated as preventers of happiness and liberty. One can understand why the surrealists were attracted to this film. Poetry and desire, law and transgression, against a backdrop of antimilitarism make Idylle à la plage a perfect example of the sort of cinema Breton favoured.

The original negative disappeared in the bombardment of the laboratories of Billancourt in Paris in 1943.Current copies are printed from a contact print made from the sole surviving copy from 1931, which had been edited differently by the Belgian distributor and who had re-named the film Quand les coeurs ont vingt ans. Current copies therefore differ from the original montage, which explains the jumps in the music.
Director : Henri Storck

Camerawork : Gérard Perrin Sound by the Jean Tedesco studios at the Vieux-Colombier cinema in Paris

“The film was released in Paris in 1932 at the Vieux-Colombier, with middling success. In Brussels it was booed during the presentation gala where it played with M. le Maudit by Fritz Lang.”

“The director’s merit is to have avoided any verbal sophistication or aestheticism in his film. The seaside, and the broad expanse of wet sand, are not a random, interchangeable backcloth, but end up acting as a necessary character. And these shots of vast seascapes inhabited by two human beings express a pagan merging that reaches a state of harmony.”

“The seashell is not a pledge of love but a mediation of boundless love: a lucky charm. She leaves a print of her hand on the sand, he draws in the lines of destiny. The dead crab on a little pile of sand, surrounded by candles (what child built this catafalque worthy of a king?) is a less benign omen like Buñuel’s scorpions. If you bring the shell to your ear… What’s this? You can hear the sea… Here, on the beach? That’s not it. Storck has eyes to hear. You see, when you put the ear and the shell side by side, they have the same configuration… and the same delicate sensuality. The demon of analogy is watching over the lovers.”

“This film, shot on a beach of Ostend attempts to express on screen a sensation, over time, out in the fresh air, the sky, the waves and the sand. Of course this is not a formula destined for success. It is an effort at simplicity and pureness. This worthy attempt at asceticism is not without a certain monotony, to be sure, but Idylle à la plage has qualities that one would like to see more often on the screen.” 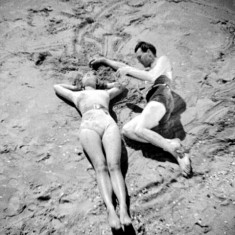