Before the word, there was the gesture… says the commentary. This film explores the universal language of the body as expressed by the dancer Juana.

Firstly the hands, with their functions of survival (taking, embracing, caressing, etc.), then the gestures of prayer common to all religions, finally the plunge into pantomime, dance and its ritual of communication through different civilisations: China, Albania, Hawaii, Japan, India. The cinematographic set up is austere, voluntarily theatrical, excluding any possibility of becoming distracted by an anecdotal backdrop so as to fix attention on the very substance of the subject: the body and its gestures. A fade to black and the commentary mark the passages from one dance to another. This is a sober and didactic approach to body language.

Film commissioned by the Ministry of Education and Culture.

The grace of dance combined with anthropological dryness. 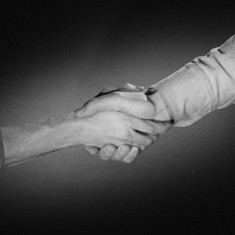