Many thanks to the marchers of entre-Sambre-et-Meuse, to their president, Doctor Wauthy, to Professor Joseph Roland and to the fife-player Robert Simon.

The only film among those on Belgian festivities with commentary. The images set the region, the text, the costume and the sad and beautiful story of Rolende, the king’s daughter who, to flee an arranged marriage, ran away and died of exhaustion near an oak tree after having charmed Saint Ogier.

Once a year, her reliquary is paraded and her pious suitor gets to see the bones of his beloved pass in front of his chapel. Once the context is established, the film follows the proceedings, which begin at four o’clock in the morning to the sound of the drums and end, after a 35 km-long journey through fields and communes, with a solemn mass. This event energises the whole town and the fervour of its inhabitants. Men women and children disguise themselves as soldiers of the Empire, fire shots and drink to keep up their courage. Priests parade around the countryside in their black robes and everybody looks very pleased with themselves. Storck excels at capturing little scenes: the false captain so pleased with his temporary importance, the exhaustion of the marchers sweating under their képis, the handing over of the reliquary between carriers. This folkloric event is carried out without tourists and concerns about a dozen villages, involving all social classes: the military, the ecclesiastic, the rural and the social. 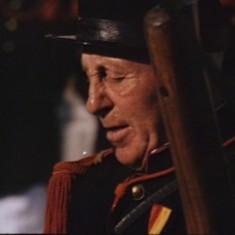