“Ernst Moerman, the unforgettable unknown, the extraordinary ughtrope walker” (Carlos de Radzitzky), divided his time between the Bar, affairs, jazz and poetry A friend of Paul Eluard, director of one film, “handsorne as a young god, shaping his whole life like an exuberant poetic fantasy” (Robert Goffin), he finished up living in a caravan he had chosen for his home. He led a brief life, From 1897 to 1944, and let his work be guided by whatever teck his fancy, from a production of Tristan et Isolde to a Vie imaginaire de jésus-Christ (“Imaginary Life of Jesus Christ”) and the sardonic verse of Fantômas 33. An ardent fan of Souvestre and Allain’s character Fantômas, whom he dubbed “the demoralizing gentleman”, he made him the emblematic hero of his medium-length silent film, Monsieur Fantômas, a “280 OOOth instalment” in the story shown with a score by Robert Ledent at its première in the Brussels Palais des Beaux-Arts on 12 October 1937, on the same bill as Un chien andalou. 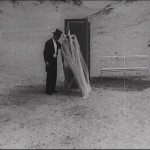 Shot on a shoestring budget on a beach and in an old cloister, the style of this scathing surrealist satire is immediately recognizable as that of the Feuillade serials. ln top hat and tails, the Master of Crime (played by the future father of Johnny Hallydayl) tours the world in pursuit of the beautiful Elvire, punctuating his travels with mischief and acts to offend proper decency The film encompasses amour fou, the meanders of dreams, fanatical anti-clericalism and a plea for subversion and adventure in “a world where nothing is impossible, where the miracle is the shortest route from our uncertainty to mystery” (E. Moerman). 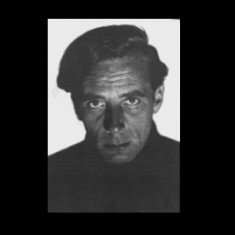