The work and fantasies of one of the COBRA group’s principal painters, with the participation of Alechinsky.

Pierre Alechinsky is one of the most important painters of his generation. The film that Luc de Heusch, the author of Magritte or the Object Lesson, consacrates to him is neither an anthology nor a primer, as it takes into account an interior experience.
It is a complicit regard on the work and the fantasy world of a man for whom drawing has become a kind of handwriting, where the hand itself discovers a kind of alphabet, observes things and gives them names as the ink and water flow. These are signs that emerge from the night of language, ideograms of an imagined and imaginative language.
They organize and arrange themselves into a kind of uninterrupted bande  dessinée.
A turning point came on a trip to Japan in 1955 when the painter discovered traditional calligraphy. He then settled in Paris. Alone in his studio, the painter became a volontary prisoner covering the walls of his cell.
A brief animated film made by Alechinsky introduces sorne of his important paintings. Alechinsky as a musician.
Alechinsky as a collector of rare objects charged with rneaning (magic?): postcards found at the Flea Market, irnagesa drift, off course. Alechinsky intervenes again, he energizes them, animates tI(ern. The rnonster who haunts the painting titled Central Park takes shape.
The painter splashes a few spots on a piece of paper before hirn, and Gilles de Binche suddenly appears. The ritual dancers of the Carnaval invade the rnemory. The project is swept over by a splash of water and is suddenly in peril. But the definitive work, so knowingly prepared, is born of this deluge. 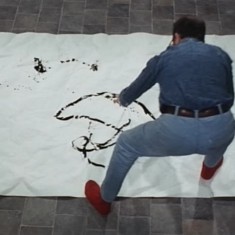