Docks & Dockers is a compilation of thirteen films on the six Belgian seaports, as they were put on film by various directors during the past one hundred years. These films tell the story of a metamorphosis, not only of the harbours and ships, but of an entire society. The growth, the technology and a changing economical model have created a distance between the ports and the cities they were once attached to. The thirteen documents proposed here illustrate this metamorphosis. The individual history of the ports of Antwerp, Brussels, Ghent, Liège, Ostend and Zeebrugge is put in a broader perspective by Patrick Verhoeven.

Arrival by Boat | City Panorama Seen From a Boat
(Alexandre Promio, 1897, 1’57)
Two short films made by Alexander Promio for the Association Frères Lumière. They are among the oldest existing film images of the city of Antwerp.

Work in the Port of Antwerp
(Anonymous, 1925-1930, 17’43)
A compilation of images from four promotional films about the port of Antwerp. This historical material shows not only the numerous docks and locks, but also port monuments and professions that have disappeared.

The Port of Ghent
(G. Pieters, 1937, 10’55)
A network of rivers, canals and railways assures the connection between the industrial port of Ghent and the European hinterland. Thanks to its modern infrastructure, the port is capable of handling a great diversity of goods.

West Flanders Newsreels
(Jean-Marie Pylyser, 1982 – 1984, 4’50)
Two newsreels on the progress of the expansion works in the port of Zeebrugge in the 80s and the official opening of the new Pierre Vandamme lock in 1984, in the presence of ministers and officials.

Yser Newsreel
(Anonymous, 1919, 3’40)
In Ostend the Royal Family goes on board of the American destroyer USS Ingraham. In open sea they change ships and embark on the war vessel ‘George Washington’, which will bring them to New York. Music Hughes Maréchal.

Life Doesn’t Stop
(Paul Pichonnier, 1939, 3’50)
To reassure the passengers of the line Ostend Dover in times of war threat, a promotional film was ordered to Paul Pichonnier on how the crew on board gives absolute priority to the safety of the passengers.

A Century of Crossings
(Gaston Vernaillen, 1946, 15’10)
Documentary film made by Gaston Vernaillen which offers a retrospective view on a century of crossings between Ostende and Dover. The history of the line is illustrated by paintings, scale models and old drawings.

Duel with the Tanker
(Armand Van Coppenolle, 1964, 20’25)
Pilot Lievens has to guide a badly steering tanker with a dangerous cargo safely to Antwerp. Docu-fiction based on a novel by Libera Carlier.

Gates of the Nation
(Henri Storck, 1954, 16’32)
Promotional film for the Belgian ports by Henri Storck, based on the book The Belgians and the Sea by Henry De Vos and Charles Bronne. The film emphasises the importance of the ports for the country’s economy.

DVDs can be bought at the Fonds Henri Storck 17 € 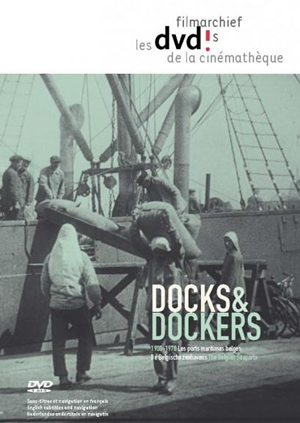