I wanted to record on film simple forms, exercises showing the relationship between rhythm and movement, visual musical values.

All that is left of the film are four big rolled up sheets of paper like ancient manuscripts, eaten by rivers of wax and discovered quite by chance in the mass of untidy archives. In his book Henri Storck ou la traversée du cinéma, Jean Queval published photographs of them. They are notes jotted onto the back of large sheets of paper that Henri Storck, owner/manager of a shoe shop, used to organise his stock.

They are sketches with notes. Here are a few examples without the drawings:

Vibratory movements. Discs spinning and shrinking. Lyrical phases. Fantasies. How can movement and its rhythm help to give expression to an image: that is what remains to be discovered by abstract experiments of simple forms and volumes in movement.

Movements in space. 1, 2 or 3 points. Premise: movement always comes together with unity.

Lines. Path and attitude of two lines of a certain length prey to two different and independent but rhythmic freedoms of action.

Forms that can be sung.

Points: psychological notations. Will or desire. Fall or attraction. Certitude and calm.

I wanted to get to the bottom of cinema, to find out what was intrinsic to it. There should be an institute for research into these things.

Eisenstein concerned himself with such matters and covered a lot of ground. And many others carried out fundamental experimentation; I was impressed by Hans Richter, Viking Eggeling and Walter Ruttmann’s research.

There is a possible explanation for the disappearance of the film. In Brussels, on the first floor of a house in Saint-Josse, there was a Dutch laboratory where Henri Storck had his films developed in a bath of borax for 9 minutes. Given the explosive nature of the film and the danger of manipulating it, there were too many fires and the communal services requested that security work be carried out, including the installation of iron doors etc. The cost of such work proved to be too high and the laboratory decided to close down. Henri Storck offered to buy it for 45 000 francs. There were large lead developing tanks into which the film was plunged on big frames. After this came the washing bath then the fixer. Labisse had rented a huge place in rue Longue in Ostend. It was a former dance hall and he offered Henri a space to set up his laboratory. And so the equipment was moved from Saint-Josse to the seaside and became the laboratory Lumina, a designation rapidly illustrated by several technical innovations. An Italian printer with six lights was perfected until it supplied twenty. It rapidly grew in notoriety and Idylle à la plage was filmed on Kodak panchromatic, which thanks to its sensitivity did not require filters. It was the film used by Flaherty to film Moana. Nevertheless, the laboratory assistant who worked there must have made a mistake in the fixing bath where the films abstraits were soaking, and when the tin was opened in 1940, there was nothing left but dust. All that remains are these working notes of a young man who, in Ostend, reinvented cinema or, more precisely, asked questions that shook the whole avant-garde in Paris, Berlin and Moscow. 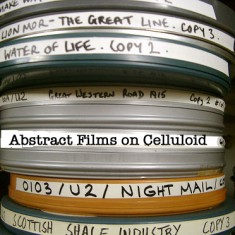