Construction of the Tunnel Under the Scheldt

In 1932, Storck was in Paris. In Ghent, the artist and publicity agent Pierre Charbonnier Gaumont to make a big documentary on the history of electric power plants and the drilling of the tunnel under the river Escaut, which was a technological first.

His most ardent wish was to use a Belgian filmmaker. He called Storck to do some rather difficult shots. He was asked to climb up a tall, narrow factory chimney with his kinamo camera to get some general views of the landscape. And he did, the clouds rushing past him at high speed. Above all he remembers how athletic he was then, and that this was the ideal place and time to show off his sense of balance and acrobatics. He was warmly congratulated. Now he was asked to clamber into the mine wagons made to carry coal and which break the bones of those imprudent enough to use them as a means of transport. His mission was to film everything on the six hundred-metre journey. It was only after he had accomplished these two missions (one would like to see the images), that the brave director was told the truth: all the cameramen in Gaumont had refused to film such risky shots!

And that was not the end to the adventure, since after that he was called upon to descend into frozen tunnels at –26° and to film at a pressure of –3 atmospheres, requiring over an hour of decompression. The verdict: You have made a very beautiful film, which seems to have got stuck somewhere in the system, for although it is mentioned in a film by Robbe de Hert, Henri Storck, témoin du réel, the wrong images, not those produced by Henri Storck, are used.

The negative of the film left to the Franki company was nowhere to be found, either at the Belgian head office or the Parisian head office. This is a pity for, while Storck did the directing, the shooting was done by Kaufman, the head cameraman of Vigo, and Louis Berger who went on to work with Pabst. 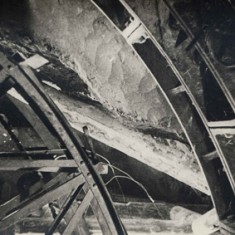