What is delinquency, how can it be prevented, how should one respond to it? These questions were answered in the film by parallel fictions of two adolescents.

Justin, a young runaway and thief, an illegitimate child ill-loved by his mother and stepfather, is a perfect role model for the boy Antoine Doinel in 400 coups by Truffaut. Jeanne, a mixture of Cosette and Mouchette, is prey to all the misfortunes of young girls who are abandoned, raped and prostituted. Their stories are beautiful and sad and are concluded by a judicial and institutional happy ending. But above all, they are made moving by remarkable directing that makes them into real film characters and not simply mouthpieces for the good cause. Other mini stories, that of the little robber girl, the violent boy, and the spoilt child bring counterpoints and open the field of delinquency that touches all social levels. The social response, be it judicial or psycho-medical, is analysed and deemed positive overall. All of this half-fiction, half-documentary film is told in voice over, where the inner monologue of the characters and an explanatory commentary are intermingled. The message is generous and of topical interest, but above all it has concealed within it like treasure, two perfect little tales.

Film commissioned by the Film Council of the United Nations Organisation, New York

…was entirely filmed in natural exteriors and surroundings (the Law Courts in Brussels, a psycho-medical clinic, …). The argument of the film, that there are no guilty children, only ill or traumatised ones, is pertinently demonstrated through specific cases.

Henri Storck has long dreamed of setting up, in Belgium, a regular production of dramatic films worthy of a country that has created documentaries of such high international quality. The team that worked on delinquent childhoods worked with such great enthusiasm because it intends to demonstrate that, by intelligently applying the processes of the post-war Italian school we could envisage, with the modest means at our disposal, producing full-length fiction films of high quality in Belgium.

With this commissioned film of six hundred metres, one of our most talented documentary makers attempted and managed to prove that Belgian cinema – this abandoned adult, often delinquent in spite of itself – is capable of succeeding when it tries (…). This great full-length film is a true test of maturity for any cinema work that claims to be universal.

The sound, the music, the script and the commentary are practically faultless. The actors’ performances, especially the children’s, are very natural, so much so that one can almost believe one is in the presence of true delinquents. 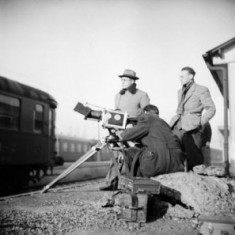