This overview of children’s festivities is linked to both pagan traditions for the winter solstice and the religious ceremonies of the Nativity. Also important here, is the ethnological interest of the customs which are gradually losing ground, or which are no longer so bewitching for the children. This film managed to capture their joy and fear, their expectations and their bedazzlement.

Script : Henri Storck based on an idea by Georges Franju and René Barjavel

Production : Information service for the Netherlands, The Hague (Rijksvoolichtingsdienst) 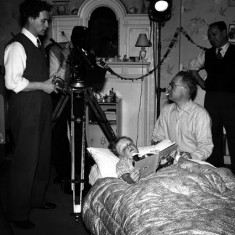