One of the early films. It is structured in visual chapters: the port, anchors, the wind, the spray, the dunes, the North Sea … a series of images that have nothing to do with anecdote or explanation. Each shot is at the very heart of the definition of the word involved. It could be said that this is the first film of conceptual experimentation.

Shot after shot (the montage is quite rapid), Storck offers a glimpse of a fragment, an aspect that orders its multiple constitutive elements. They invoke their cinematographic equivalents, light, framing, the scale of the shots, movement, rhythm. The water, the sand, the waves are an integral part of a cinematic language. This is what Germaine Dulac and her friends would have called pure cinema. A poetic and kinetic shock, without fiction or sound, which relieves film from its narrative obligation and restores it to the world of sensations that it alone is able to carry. An immediate masterpiece that was one of the foundations of Storck’s way of seeing things.

With Images d’Ostende, his camera caresses smoky boats, slides over anchors lying on the jetties then pauses to contemplate the games of nature, little waves on ponds, the movements of the grassy dunes, the coming and going of the spray and the sea.

…Without a doubt this can be called experimental. But it must also be said, that contrary to many others (pure rhythms, diagonal symphonies and mechanical ballets), in this film of Storck’s, the tendency towards abstraction does not undermine the material, dense, sensual dimension of the elements but rather exalts it by getting down to an organic, elementary, vital level. The tourist’s Ostend remains out of frame (it is winter); the wind chases away the few holidaymakers, just as the lens does all trace of humanity. All that is left is the sea.

Images of Ostend is undoubtedly one of the most beautiful works of pure cinematographic poetry that silent cinema has left us… The new form of cinema has deprived us of the taste for such works in which the soul of cinema vibrates so intensely. Yet they remain testimonies of infinite greatness that one cannot see without a certain nostalgia.

(…) Ephemeral, fleeting beauty on which the condensation of cinema imposes the living rhythm of dance. A retreating wave may leave ridges on the sand, but the wind will come and draw new geometrical forms. Storck records these forms as a moment of extreme tension, just when the wind forces a new shape to take the place of the old. (…)

Images of Ostend is immediately identifiable as a masterpiece of documentary cinema, of landscape seen through the eyes of a strong-natured observer. The part entitled The Dunes attempts to recreate the gentle and infinite ridges in the sand for the eyes to feast on. The sea, the longest part, is the most wonderful. For the first time film manages to convey the deep giddiness the sea induces in us: a huge mass heaving with a thousand rhythms. The mobility of the waves, their suggestions of horizon as well as depth, are all magnificently rendered by simple means that are as successful as they are unexpected. The spray of the sea, the anchors, the wind are all cinematographic poems that open vast possibilities for poetic documentary cinema. 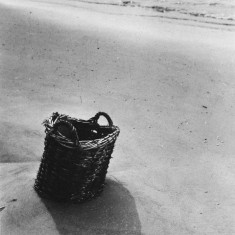