Henri Storck’s second film dedicated to Paul Delvaux, this time in colour. It is preceded by a prologue showing the artist in his workshop talking about his love of drawing, perspective, his inspirational themes (trains, lamps, skeletons), in short the artist’s preoccupations and the way he approaches them.

The film itself is a long ramble by a slow camera which explores a few very famous paintings and the world of the big, still women who gaze into space. The poem and the music mirror this atmosphere and add sound to the dreamy landscapes.

Film dedicated to the memory of Luc Haesaerts and André Souris

Film made on the initiative of the Ministry of Culture and Belgian Radio and Television (RTB).

Film generally preceded by an 8-minute report showing the artist at work in his workshop talking about how he develops a painting.

The second film on Delvaux provokes, perhaps in a more limited way, the same impression given by the first. Storck’s view is similar to that of the shipwrecked man who, in Bioy Casares’ The Invention of Morel, observes, questions, brushes up against characters who belong to the time established by their creator: impenetrable time that walls them in to the frozen eternity of the machine of representation.

It was René Micha who had the idea of retracing the journey that the artist endlessly repeated to the land of childhood: where, as Novalis would have it, poetry and truth are the same thing, where the Greek temples follow on without transition from the stations and red brick cafés, where young women born of the wave or the forest, skeletons, wise men lost in the contemplation of a pebble or the phases of the moon, endlessly cross each other with empty expressions. But, despite the photographic perfection and the masterful use of colour, the film is cold and the text by René Micha, read by Jean Servais, is rather redundant. 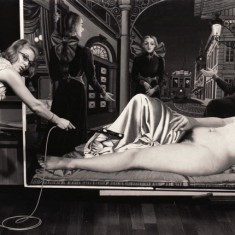