A village crossed by three borders, the German, the Dutch and the Belgian and inhabited by three worlds, those of the workers, the customs officers and the smugglers…

Charles Spaak brings all three together by weaving an intrigue between them, imagining characters and situations that make it possible to deal with the problems and transmit a message: the customs officer’s daughter loves a smuggler and lives with a worker; the boss, the smugglers and the workers plot together to save the factory; the smugglers and the customs officers reach an agreement to maintain the borders. In short, this is History with a capital ‘H’: the creation of the Benelux, the projects of the European Union, the trauma of the Second World War, the social and economic issues, the survival of businesses and the workers’ struggles are embodied in love stories, there is suspense, Clochemerle-like humour, a social conflict. This film occupies an important place in the history of Belgian cinema: it is Henri Storck’s first full-length fiction film. Like the second one, Permeke, it is broadly based on a documentary study and vision. This was the first full-length fiction film shot in Belgium after the war, the first international co-production in the same period, and the first film that was truly European in spirit.

Dubbed versions in Dutch and German.

It was those in the Marshall Plan who were responsible for filmmaking, Stuart Schullberg and Lothar Wolff who suggested I make a documentary film about the birth of the Benelux. Given the magnitude of the project I thought of calling on the talents of a great scriptwriter and was lucky enough to convince the most talented of the bunch at the time, Charles Spaak, to participate in this adventure.

We immediately got in touch with the Benelux committees in Belgium whose president, Mr. Van Dorpe agreed to take on the production of the film, with the European Centre for Culture in Geneva, directed by Denis de Rougemont who put us in touch with the president of the European Union of Federalists, Dr. Eugène Kogon of Frankfurt. With a view to producing the film, Dr. Kogon created a film production company in Frankfurt called Europa Film, which took on the role of co-producer with Belgium where heroic efforts were made to ensure the financing of a fiction film. Spaak and I had in effect given up the idea of a documentary, thinking that a fiction film would be more likely to capture the attention of the audience and interest them in an unusual problem. The financing problems were all the more troublesome in that the measures for encouraging Belgian filmmaking didn’t see the light of day until about ten years later. Spaak and I undertook an in-depth investigation in political, industrial, employer and trade union circles in Belgium and in Holland, and came to some bitter conclusions about the psychological reactions to the economic union…

Henri Storck, Presentation speech of the film for the Jean Vigo Federation in 1988

The film has an educationally jovial tone and that which could have been flat praise for the newly created Benelux became a caustic reflection on the relativity of borders and the delights of illegality. Charles Spaak certainly contributed to this success by weaving this exemplary script, wherein each character, avoiding any over-simplification, finds his or her own place in the whole… But the beauty of what we see… magnified by the camera of Eugène Shuftan… serves to confirm the strength of Storck’s vision.

It is evident that Le banquet des fraudeurs adds nothing to the international artistic reputation of Henri Storck… there is nothing to remind us of the poetic and humorous qualities that are so much part of his usual style… The weaknesses, the tentativeness and the hesitations of Storck are evident especially in the directing of the actors who are not always wisely chosen… Moreover, Spaak… has not been able to find an apt human illustration for the economic and social problems he had to elaborate and which seemed a priori abstract. As, on top of everything else, he wished to deal with too many problems at once, the whole is somewhat hybrid and incoherent, worsened by the fact that his rather literary style is not at all suited to the direct vision that Storck desired.

Henri Storck, who likes the discipline of craftsmanship, broke his film down into 427 shots. But this clockwork precision could only work properly elsewhere than in some Cinecitta. In the open air of Verviers, the unexpected sprung up everywhere one turned. Moreover, the inclination of our filmmaker for testimony recorded on the spot, for the seduction of a possibly sensitive image, led to constant temptation: the observation of folklore, the picturesque quality of a group of curious countryside onlookers, or of a beautiful girl passing by… A hectic agitation animates this mixture of international and local population… It was a dispersed world that needed to be given order. Written signs served as circulars. One of the more memorable ones bore the message: The dead smuggler will be filmed at 8:30 am. 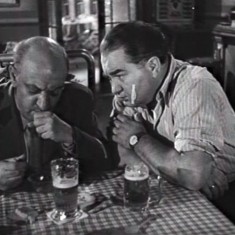