Misère au Borinage accompanied the rebellion and distress of the working class at a determining moment in its struggles. Symphonie paysanne was filmed during years when historical attention was seriously required elsewhere and when the time for peasant revolt was past.

This double obliteration, of date and attention, diminished the perceived mastery of this film. This was before the peasants’ incomprehension in the face of European directives and their demonstrations, before the impact of ecology, just at a time of defiance, that of Giono’s disturbing and vaguely Pétainist call for a return to the land.
This configuration, which was so completely contrary to Henri Storck’s deep and constant social generosity, prevented the film from taking its proper place. Film historians and film lovers, however, are not to be fooled. It is time to say that Symphonie paysanne is an important and admirable film. This film is one in a line of ethnological films by Henri Storck: the sea (with the whole cycle of films on Ostend), the conditions of the working classes, the conditions of the peasants, the recording of festivities and carnivals, the importance of art and artists; this is the filmmaker as witness of his times. It is a film in four seasons, with a fifth part, Noces paysannes, which is, in a way, the metaphor for the unfolding of the cycle wherein man takes responsibility for relationships of play, love and constant work that regulate the progression of the world.

All the shots in this film are inspired: the earth and the sky, the rows of trees, the animals (in all the history of cinema there have never been more beautiful cows or horses than these), haymaking, harvesting and above all, the terrible pulling up of potatoes or beetroots that remind us, no pun intended, of the Damned of the Earth. Yet everything is bathed in harmony. There is nothing idyllic about it for the images of the unjust struggle with the elements are very present. But there is an additional Virgil-like contribution, with the march of the world symbolised by the parallel march of the human, vegetable and animal realms.

The idea for this film goes back to 1936. I had always thought that city-dwellers should be shown the hard work done by peasants in the same way that I showed that of the miners in Borinage and that of the Ostend fishermen. I like these little-known oft-scorned peasants, because they are people who fight against real difficulties, who are in tune with the rhythm of the seasons. They do not struggle against human stupidity or badness, but against the whims of the weather, frost, drought, plant and animal diseases… and the result of this effort is the supreme reward: they create life.

It so happened that in 1941, Camille Goemans was employed in a modest capacity by the Department of Food and Agriculture. He recommended the project to management and in the end, the filmmaker had the means to make the film he had been thinking about for so long. The filming lasted three years and thus managed to embrace all the seasons, without which, it would have lost its very reason for being… In Flanders, the farmer at whose place Henri Storck set up his team, was arrested by the Germans and shot dead. In Wallonia, the farmer was assassinated by the Rexists. These were the final dramas in this adventure involving a team of filmmakers, but the film goes beyond the time when it was made and celebrates a timeless forbearance.

Henri Storck’s masterpiece in the field of sociological testimony is probably the long documentary (too often ignored by film historians) devoted to the life of Flemish and Walloon peasants in the Brabant region. The film is constructed as a grand, slow nature poem, where the life and death of men, animals and plants are so many identical, equivalent lyrical themes. And yet, it is man and his ceaseless labour that are the film’s centre of gravity.

The film is defined by its attention to movement, the vital quiver that touches all of perception: In fact, my greatest pleasure is to induce in the spectator not only a quiver of the mind, but also a physical quiver. Henri Storck enjoys filming kinetic happiness – an apt description of cinema – this generalised vibration of the being receptive to the voice of nature…

One can but share the enthusiasm of Henri Langlois before the fresco of Symphonie paysanne, a veritable Georgics of the cinema. In Henri Storck, the art of movement has found its Virgil.

Our projection of Symphonie paysanne raised great enthusiasm. I myself had never seen it in its entirety… I am staggered and God knows I thought it would be a good film… But what a film! People weren’t expecting it and are still under its power! So I am writing to request two things: 1/ Permission to show it in Cannes with Quiet one, Monsieur Verdoux and Louisiana Story. It is truly the great film necessary for the Cinémathèque’s gathering down there! I am absolutely counting on it. 2/ If it is possible to keep a copy or find a way suited to our financial resources to have a copy for myself, for I would like to project it in the cinema museum among the two hundred masterpieces of the cinema. 3/ Have you shown it to Flaherty? Mary says it’ll blow his mind…

This film was made in the farms of Brabant within a radius of twenty-five kilometres from Brussels.

Le Printemps was filmed in the Duigemhof farm in Herent-Winksele near Louvain with the young farmer René Evers. Today (1994) this beautiful farm, despite being listed, is in a sorry state of decay. A few shots were filmed in a farm in Lennick Saint Quentin in the Payottenland and in Veltem on the Peeters’ farm.

L’Eté was filmed in the village of Saint Bricius Rode in the t’ Hof ter Rode farm inhabited by Henri Verbruggen, his parents, his sister Miet and his brother Victor. Some scenes were filmed in the Charleroy farm in Grimbergen and the Vander Hasselt farm in Oppem. L’Automne was filmed on the beautiful Moens farm in Tombeek Terlanen, near Wavre with seasonal workers hired to pull up potatoes and beets and also in Montaigu for the pilgrimage scenes.

L’Hiver, like L’Ete, was filmed on the Verbruggen farm. Some snowy scenes were shot in the Ardennes.

Les Noces paysannes, was filmed in Oppem, near the Meise on a farm held by the Vander Hasselt family, Hof Ter Steen, with Jeanne, the young bride and her four brothers. The role of the husband is played by Henri Verbruggen. The genuine families of the couple play the roles of extras. The farm is still occupied by members of the family. The marriage scenes take place in the village of Oppem.

Notes by Henri Storck in Autumn, 1994 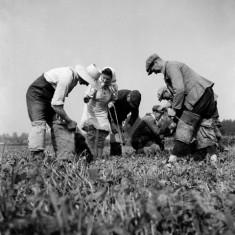