The Belgians and the Sea

This film is now only the shadow of a film. It is completely faded and all the images have turned a uniform reddish-brown.

The filming was done in Antwerp, Matadi, Santos, Buenos Aires. The film was intended to show the port and commercial activity of Belgium, its place on the international markets, its transport of goods, in short, to bring to the fore its economic dynamism. The commentary is omnipresent and hagiographic and the colours have disappeared. A few remarkable scenes: the transport of bananas, the harvesting of coffee, the gauchos and the herds…

Filming in Africa, Brazil and Argentina 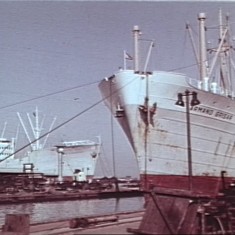