In certain villages of entre-Sambre-et-Meuse, there exists a tradition whereby the participants of the famous military marches continue the celebrations the next day. Under the influence of joyful libations, they put on amusing sketches parodying the military and religious rites so respectfully observed the day before.

This is the release of tension after the parade, the celebration of a glass of beer carried like a reliquary on the shoulders of the already unsteady worshippers. The smart military order breaks down, the Second World War and the American marines mingle with the hurlans and the sappers. Morals and behaviour come to resemble the ragging of students: applicants are baited and beer is poured on their belly. The film follows the general atmosphere, has fun filming the boots, and the parodic editing compares the soldiers to a herd of cows.

The folkloric procession of the Madeleine in Jumet, which takes place in July, parades through a meadow named Terre al’dance. The participants dance and caper about in a manner that harks back to a very old legend according to which a group of pilgrims led by a priest set to dancing here on learning that the well-loved lady of the manor had miraculously escaped the plague.

This is zaniness on an unprecedented scale: choir children dance joyfully, carrying the monstrance; soldiers march backwards, religious statues are carried at a rhythmical step or bob up and down on jiggling shoulders, in short, these are parades overcome by delirium and dancing mania.

All these larger-than-life events are accompanied by brass bands, drums and bugles and the sound track is as agitated as the images on the screen. 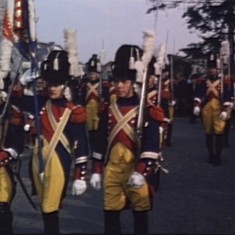