One of the first European films: a cultural commission that allowed Henri Storck to continue a personal work, that is to say, approaching a painting as a filmmaker, entering into the painting and the subject by framing them differently, offering them the screen as a fictional and emotional field. The painting leaves its own frame to enter that of the cinema. A double opening.

The first is historical. It is the very subject of the film: 59 landscape paintings come out of Marie’s open window, we go from the sacred to the profane, from the interior and interiority to the representation of the world and nature. The second is linked to representation: how to reconcile the space of a painting and the space of a photogram? Assuming this to be the case, we are invited on a cultural tour through various countries. From Bosch to Turner, from the Flemish primitive artists to Manet, from Rubens to Monet. The chronology is respected but there is the joy of seeing. The rhythm of the film gives the eye time to linger… The eye is delighted. Sometimes the ear is saturated. But Henri Storck earns his stripes as a great image-maker for knowing which details in the paintings tell a story.

Commissioned film : On the initiative of the five countries that signed the treaty of Brussels: Belgium, France, Great Britain, Luxemburg, The Netherlands (Union of Western Europe)

Contrary to that which has been done in other films of the same genre, where the camera visibly places itself between the viewer and the work of art, we did our utmost to completely eliminate the artifices of filming, to conjure away, so to speak, the camera in order to plunge the viewer into the very world of the painting and finally into the landscape that it represents. We want the viewer, through the paintings of artists, to discover for him/herself the sentiment of nature and rejoice both at his own emotion and that felt by the artist… Thus our ambition is not to create a critical or didactic work.

A documentary film of exceptional quality intended to celebrate the respective rural, forest and bucolic charms of five countries, as seen by artists, from the Flemish primitives to the impressionists (…) The special camera for shooting directly in Technicolor was placed on a travelling dolly whose to-ing and fro-ing was combined with clever effects of sweeping panoramic shots giving access to the most intimate details of the canvases of the chosen artists. 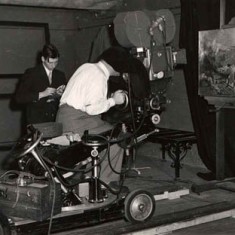