The Wheel of Fortune

Report on the public draw of the winning numbers at the Cirque Royal.

Before this became commonplace on television, the machines that spun the balls of fortune were a big event. Congolese people in uniform, important gentlemen in majestic armchairs, the Brabançonne and the highly elaborate ceremony for the draw to prove that there was no cheating. Filmed in a literal manner, looked at now, sixty years after, the film has taken on a certain air of nostalgia and gentle irony. 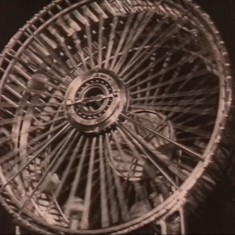