To the Right and Freedom in Kortrijk

As Jean Queval wrote in his book Henri Storck ou la traversée du cinéma this is a film of processions, choirs, concerts and speeches.

1939 is not a neutral date. The film takes place on three levels. First of all, there is the nationalistic staging, with the enormous crowd, the raised fists, the parade of gymnasts, and the huge banners. On the left, as in the other regimes, the tendency is towards representation on a grand scale and affirmation of ideology. That was part of the contemporary climate before the disaster. Then there was a demand for Flemish identity, glorifying the land and the beauty, the Flemish people, their history, their courage, their future and the struggles that the ‘Vlaamse kamaraden’ must still shoulder. Finally there comes a socialist speech advocating the unity of the workers, stressing the gospel of fraternity, the right to work and eat. Henri Storck’s images are as close as possible to this ambiguity: the great flags bearing the Lion of Flanders, the nationalistic songs, the social banners and the strong speeches, the signs with the symbol of the day: a fist grasping a club. Among the leaders and speech-makers: August Vermeylen, Paul-Henri Spaak, Camille Huysmans, Richard Declerck, G. Balthazar, Hendrik de Man, Arthur Gailly, Paul de Mont, Maurice Naessens. 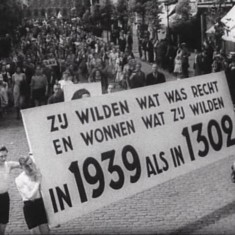