The tale of a cruise: the sailing ship Mercator leaves Antwerp and spends eight months cruising around the South Seas. This is Rousseau-like tourism, where the director stands firmly in support of the noble savage whom Puritanism and civilisation are in the process of divesting of his joy of living.

There are some very beautiful moments in the report: the passage through the Panama Canal, the sharing of goods and riches on Pitcairn Island, the sailor’s siesta, the sitting dance of two Polynesian women.

Recorded in the Pathé Studios in Joinville-le-Pont. Marconi system.

Cap au Sud gives quick evaluations at several stopovers: Pitcairn Island founded by the mutineers of the Bounty; Moorea, one of the Society Islands; Fakarava Atoll; the paradise island of Hiva Oa, the retreat of Alain Gerbault, solo sailor, and burial place of Gauguin, and Honolulu where American civilisation will soon overthrow patriarchal simplicity.

In 1934, Henri Storck founded his own company “Cinéma-Edition-Production” (CEP). One of his main aims was to produce commissioned films. Commissions soon flowed in. Storck produced a few documentaries personally, but declined the offer of a long cruise on board the training ship Mercator. He entrusted the filming to the former cameraman for Joris Ivens, John Fernhout, who Americanized his name to Ferno. He asked him to concentrate on the social context, the environment, the professions, the traditions and economic motivations that he felt it was important to observe. Fernhout brought back a considerable amount of film in 1935, which provided Storck with enough material to edit three extremely well-made short films that established the reputation of CEP.

Harmonious images combined with a beautiful commentary spoken by Ben Danou, the presenter with the Golden Voice. 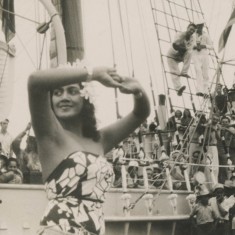