This film opens in Ghent, with its belfries, its trading houses, its wharfs and its wealth, and ends in Courtrai.

A constant and didactic commentary gives much information about the fibres and threads, the machines and the process of fabrication. The editing alternates sequences about production, filmed to a rhythm with rousing music, like a mechanical choreography (a clearly joyful camera tries to show spindles and bobbins swirling and twirling), and shots of products (materials, bonnets, carpets) spread out as they would be by some travelling salesman or a sales catalogue. These memory-images are now the archaeological remnants of an age of prosperity and a stage of industrial development.

The session (on Belgian propaganda by Belgian films presented at the Palais des Beaux-Arts in Brussels) began with a brilliant documentary by the same Storck on the cotton industry… The director shows us all the activity of this product that keeps eighty mills and two million spindles in business… Storck uses the various movements of the machines, the spindles and the shuttles to great effect…

Storck’s films give exactly what is required of them. They are clear, complete, explicit, pleasant to watch… There are a few faults, but only in the sound: the commentary is too terse, the presenter is tiring and the mixing of the music and the voice is faulty. 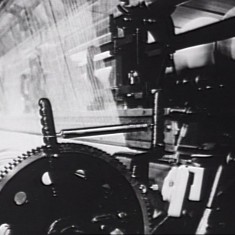