In the founding diptych that Henri Storck devoted to his native city, Images d’Ostende was an immersion in the marine elements, whereas Trains de plaisir is more concerned with the human element. The beach and the bathers, attitudes and gestures.

It is all a question of how one looks at things. What is happening on the sands? This film can be seen as a series of sketches and portraits, little pointillist touches that are structured into a warm-hearted and amused description of a summer Sunday at the beach. There are the verticals, the bathers who rush into the waves, and the horizontals, the sleepers; the adults and the children; those wearing a bathing costume and those who remain in their suit and hat; some are barefoot and others keep their shoes on; there are the beautiful girls splashing in the waves and those who look on. There is something of Doisneau or Cartier-Bresson in the still shots and the mini-scenes that border on gags: for example, the policeman comes to make sure the strap of a woman’s swimsuit is in the proper position, only for the strap to slip again nonchalantly as soon as he turns his back…

This is a set of scenes captured on the spot, which testify to a sharp sense of sardonic observation. They put one in mind of James Ensor’s paintings, for he too was inspired by the crowds of Ostend. It is also to be noted that far from having lost its humorous power, this very short film has gained additional bite over time, which adds to its retrospective interest as an historical document.

Local newspapers published the following amazing headline: America buys Belgian films! To put this extraordinary statement into its proper perspective: an avant-garde circle has sent a buyer to Europe to inquire about the value of avant-garde productions in European countries. In Belgium, the American’s eye was caught by a recent work by Henri Storck: Trains de plaisir, the film that was the highlight of the newsreel section at the Congrès du cinéma indépendant.

The gestures and physiognomies of surprised individuals captured at random in the crowd take on explanatory, caricaturing, poetic or moving dimension. The evocation of a typical social milieu is akin to the work of Bruegel, Bosch, Ensor or Permeke. 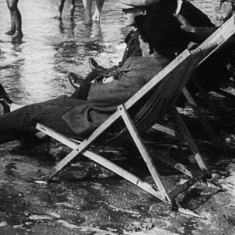