Insights into the Former Belgium

The film is divided into two parts: the treasures of faith and communal freedom. The script included two more parts, Rubens and his times, and Leopold the First, the creation of present-day Belgium. But they were never filmed. The problem was probably inherent at the very beginning in the terms of reference: skimming over the history of a country in just over quarter of an hour necessitates a furious pace through events.

Taking two fundamental facts from the end of the Middle Ages and the beginning of the Renaissance, the crusades and the cities, Eric de Haulleville wrote historical chapters or rather conference suggestions for cultivated minds.
Let us just say that this approach to commentary is terribly dated. The director only had to illustrate the script with shots of belfries and cathedrals and a few sequences of processions and guild parades to animate and dramatise the discourse. Maurice Jaubert’s music plays on cultural mimicry. On the other hand, the film conveys a premonition of Belgium as the crossroads of Europe.

Music : Maurice Jaubert (played at the concert under the title “Flemish Concert” on old themes by the composers Guillaume Dufay, Adrien Willaert, Johannes Ockeghem and Josquin des Prés, brought together by Paul Collaer)

Commissioned film : Belgo-Luxemburg Tourism Office. It was created to be projected at the Belgian Pavilion of the Paris Exhibition in 1937.

He has created a documentary that highlights the remains of other eras… full of colour, violence and pomp. That is not all that is successful about this well-made composition: in effect, Storck has, with artistic reverence, managed to touch on the past and has with great taste used light to glorify old stone, or give relief and majesty to a church tower.

His great innovation is in the use of iconographic documents in alternation with dynamic views of architectural sites and monuments. Using forward and backward travelling shots, lateral or vertical panoramas, Storck was the first to animate essentially static elements such as engravings and paintings with a view to telling a story, telling History.

… Evoking the very curve of our history with such force and such simplicity, without the aid of staging, or extras, except in a purely decorative manner, using only skilful technique to pull the truth of yesteryear from the limbo of these stones, required a remarkable faculty of synthesis and an enviable mastery of the language of cinema. 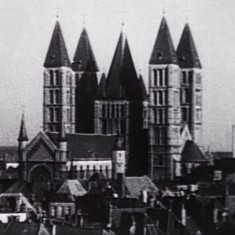