A fictional documentary. A wine dealer grumbles and protests because a postal delay has caused him to lose an excellent customer.

Luckily a model employee explains to him the merits of the postal system and teaches his scatterbrained secretary how to label and stamp the mail. His lesson allows him to tell the saga of a letter and the journey of the mail. We enter the documentary: the successive sorting, the postal sacks, the trains, the manipulations, the night work of the postmen, the effort to modernise using enormous machines from Germany. The message: A letter posted is always sent.
Although the fiction has a rather comical stiffness (the first image reminds one of the good old times of the tam-tam drums and the lesson-giver deals out his knowledge to the pretty employee by taking her for a drink at the skating rink), the documentary part allows Storck to create interesting shots of the post office workers at work

Film made on the initiative of the Postal Department. 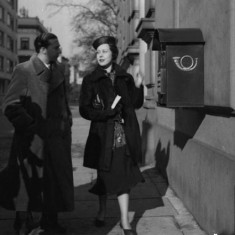