It was not easy to promote happiness and the joy of living after the disaster of the Second World War. The film manages it by giving maximum coverage to images of the seaside at holiday time (filmed in 1938) and of peaceful and pious Flanders. The war is evoked by two shots of its ending, the meeting of allied tanks with the cars of retreating German officers. Then, a few images that now have archival value: ruins, dunes covered with barbed wire and mines.

But this film of the moment has two amazing anomalies: the sequence devoted to the artist Ensor (a marvellous and cheeky change of topic), and the re-editing done by Henri Storck from his previous images of the seaside. With the Ensor sequence and its recurrent shots, he sets up his own Ostend vocabulary, and the bathers, the riders, the tennis courts, the reclining chairs and the languid bodies of the girls are no longer just picture postcards, they become strong images of his cinematographic language.

Film commissioned by the State Tourism Commission of Belgium

The fast rhythm of this film praises the optimism and the will that reigned during the restoration of the seaside where Rommel’s asparagus could be replaced by bathers tanning themselves in the sun, without fear of mines… Maybe the emphasis was placed more on the holidaymakers than on the stonemasons and mine clearers. This is probably due to the fact that the film was commissioned by the Tourism Commission.

Here is a documentary of modest dimensions but filmed with great aptness by a filmmaker with a lively and accurate way of seeing things, a sense of the rhythm and stringing together of images, qualities that are not often seen around here. 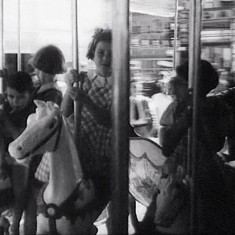