The Misfortunes of War

Second part of a diptych dedicated to the work of Félix Labisse. The first part is based on the theme of woman; this one is based on that of war. There is no documentary intrusion, simply a commented stroll through the metaphorically war-like canvases: images of sparrowhawks, science fiction warriors, Moloch robots, women killed or women killers.

The image, the text and the music come together to give an impression of anxiety and apocalypse. Here again, Henri Storck uses his method: exploring the paintings like a tale, adding intensity to a pictorial world through camera movement, commentary and music.

My adolescence unfolded in the presence of artists. My uncle painted and our family was very close to artists who lived in the town and who later became famous, Ensor, Spilliaert, Permeke… These artists from Ostend were my masters. I showed them some experiments filmed in Pathé Baby 9.5mm which was inspired by some of their own themes…

Two works inspired by his 35-year friendship with the surrealist artist and set designer, Félix Labisse. 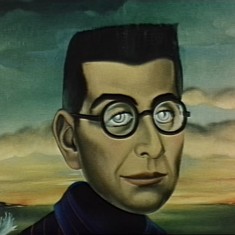