The Treasure of Ostend

A fiction film for children featuring some of Hergé’s characters, Thompson and Thomson and the dog Milou (Snowy, in the English editions of Tintin). The theme is just a pretext to highlight, once again, the charms of the resort of Ostend: the beach, the casino and the smart evenings, the sports grounds, the racetracks, the port and the boats.

While his big sister flirts with her lover, a little boy loses his dog. A gang of friends help him to look for it on one condition: that he show them the treasure of Ostend. But one Milou can hide another, and the wanderings of the little poodle offer the possibility to develop a few gags: the game with the crab, the disturbance of shows where “no dogs are allowed”, the very Tati-like scene of the tennis tournament. All’s well that ends well: early in the morning, Milou returns to his master and the door of a cabin opens like a seaside theatre to reveal to the delighted children a treasure of seashells.

Music : Joseph Kosma directed by Serge Baudo with the collaboration of the Opera of Peking, Walter Gieseking, the ballets of the marquis de Cuevas, the Los Parguayos trio and the Montoyas Sisters.

Film commissioned by the city of Ostend

The counterpoint of shots of this ingenious tale, where adults, children and dogs each play their part, throws, if not an unexpected, then a somewhat idealistic light on Ostend. The excellent colour in this film is a tribute to Storck as much to the cameraman and gives the landscapes of the city a coloured pattern and a spark of sunshine that are, without doubt, part of how things really are, but which makes light of our cloudy horizons.

The light of Ostend and that of the coast is admirable for the cinema… Painters discovered it well before I did… On this score, the problems of painters and those of filmmakers are similar. It is therefore normal, as far as colour, clarity, and the pureness of the image are concerned, to make excellent films here.

My dear Storck, do me a favour: let me write the score for your film…” It is Kosma who says this; Kosma, one of the most sought-after composers of current times in France and in Navarre. 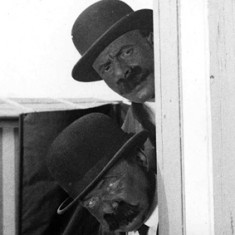