The attractions of the Belgian coast and the North Sea are defined in the commentary as a seventy kilometre-long playground. The editing and music are very “Roaring Twenties”: jazz with Willy Lewis and his black orchestra, dancing and the craze of that year, the Lambeth Walk, not to mention the appetite for pleasure and games.

This declaration of the joys of living between La Panne and Le Zoute in 1938 demonstrates the post-1936 euphoria: paid holidays, sun and rest for everybody. The following summer was 1939 and brought the declaration of war. It is certainly the closeness of these three dates that gives this film an emotion with an historical dimension that goes beyond that of simply a well-executed commissioned film. Beautiful shots (the sea, the women, the crowds, sports) and a promotional commentary: Belgian beaches go hand in hand like a troop of chorus girls dancing in the sun. 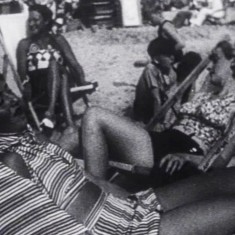