“I am mad, I am foolish, I am nasty” Self-portrait of James Ensor

Home / Other Filmmakers / Luc de Heusch / Filmography / Films alphabetically / “I am mad, I am foolish, I am nasty” Self-portrait of James Ensor

The life of the painter James Ensor (1860-1949), related by himself through his work, photos, archive films, his letters, speeches and rants.

The film-maker and ethnologist Luc de Heusch met James Ensor, the famous painter from Ostend, shortly after the war in his house in Ostend, currently called the “Ensor Museum”. James Ensor was 80 years old and was sitting under an enormous painting with bright barbaric colours he had made more than half a century before : “L’Entrée du Christ à Bruxelles” (Christ’s Entry into Brussels).
This movie about James Ensor is not a documentary but a kind of novel movie transported by the intensity of the painter’s works and his passion for language. 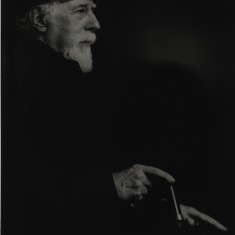