Magritte, or the lesson of things

The poetic universe of Magritte, with the participation of the painter and several writers from the Belgian surrealist group: Marcel Lecomte, Scutenaire, Camille Goemans, Irène Hamoir.

In Surrealism and Painting, André Breton write this of René Magritte: ‘AIone of  this tendancy, he approached painting in the spirit of ‘lessons of abjects’ and,  from this point of view, he taught the systematic process of the visual image of  which it pleased him to underline the weaknesses and emphasize the dependent  character of figures of speech and thought.’
The philosophie introduction ta this film prolongs that reflection.
In a preliminary meditation, the painter casts doubt on objective reality and  underlines the arbitrary char acter of the of the existing relation between an  object, its image and its narne, For Magritte, the evocation of mystery consists in  images of familiar things gathered together or transformed in such a way that  tbeir accordance with our naive or savant ideas ceases.
Having established these definitions, the painter questions vision itself. The  world is outside us and yet its only representation is within us.
If the painting is not a reflection of reality but rather an image charged with  autonomous powers, a title must be found for it which defines its magic. The  search for a title is agame reserved for certain friends on certain Sunday  afternoons.
These few keys may facilitate access ta the poe tic universe of Magritte which is  the essential constituent of this film. About fifty significant paintings have been  grouped according to the functional necessities of a cinematographic discourse.
An equivocal situation must be dissipated: Magritte is not a painter of the erotic  life; he atternpts to enchant a universe which escapes our own knowledge. He  bas nothing to say about objective reality; one must, if one is to evoke it, evoke  its mystery, awaken the unfamiliar feelings of which we are capable. 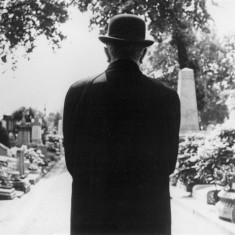