Michel de Ghelderode is one of the most important Belgian dramatic authors of  the first half of the twentieth century. Although the writer was of French  mother-tongue, it was in Flanders that he found the source of his expressionist  inspiration.

He was a great admirer of Breughel, Bosch and Ensor.
After having written his first pieces for the popular Flemish theater, he  succumbed to his natural penchant for solitude. ‘Fastes d’Enfer’ (1929) and  ’Magie Rouge’ (1931) inaugurated a series of masterpieces,
It was only after the Second World War that his work gained the favor of the  Parisian theater scene and his complete works were published by Gallimard.

From 1930 on, Michel de Ghelderode definitively retreated from public life.  The room in which he isolates himself in order to write is crowded with strange  objects that are to be found along his path to dreams and betray his love of the  pasto The violent and sensual theater of Michel de Ghelderode has Flanders as  its decor, a Flanders in revoit that yet remains deeply marked by its history. In  Bruges and in Furnes, the author discovers the pageantry of the church, the  theatricality of the processions, the prestige of the funerals. The solemnity of the  these rites inspired the pages where greatness goes hand in hand with irony and  sarcasm. The characters of his personnages are born of the unpitying and careful  observation of a colourless humanity of little people.

The vision of the poet is close to that of the Flemish and Brabant painters.  Death, an everyday presence both terrifying and familiar, appears front and  center in all his work. The painting of Breughel -notably Le Triomphe de la Mort  -is at the origin of his most important work.

For twenty years, Michel de Ghelderode was a lowly employee of the Communal  Administration. ln his life we find no spectacular event or adventure. Only the  publication of his plays bears witness to the intensity of his interior life. His  plays, which number fifty, saw the light of day in an environrnent of general  ignorance, the only exception being a small circle of fervent admirers and  friends.

Impermeable to the esthetics of the literary movements of his time, it was his  contact with the people that revealed the humanity of Michel de Ghelderode.  And that is why, finally, we see him in the Brussels neighborhood of the Marolles  where the strange Toone Theater survives, the sixth of its dynasty, and the last  puppet theater in the city. 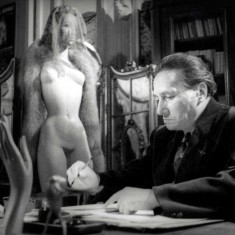