This is a classical development and presentation of the subject.
The film starts out in Belgium, land of belfries, shows the fabrication of bells, explains how they are mounted and how a set of bells is constituted, and ends with concerts and the virtuosity of musicians who work like the very devil to get this heavy sound machine going.

The commentary is informative but fades into the background to leave room for the sounds of the great bell and the other bells. There are some beautiful shots taken from bell towers and sequences where we see this amazing mechanism of wood, ropes and metal in action, animated by the vigorous gestures of the bell ringers who bustle about like athletic musicians. Filming a concert is difficult. Here, the originality of the instrument allows the filmmaker to move beyond traditional images by concentrating as much on the musician as on the body of the instrument

With the collaboration of the bell ringers: Jef Denyn and Staf Nees from Maline and Géo Clément of Tournai

This work was immediately accepted when submitted to the jury of this important competition, (the Biennial of Venice, 1936)… It illustrates with precise and harmonious images, which the music of the bells envelops in their natural atmosphere, this typically national art of bell ringing that is one of the charms of our urban landscape. 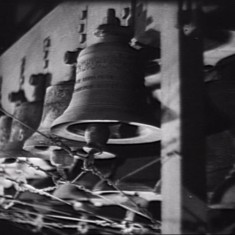